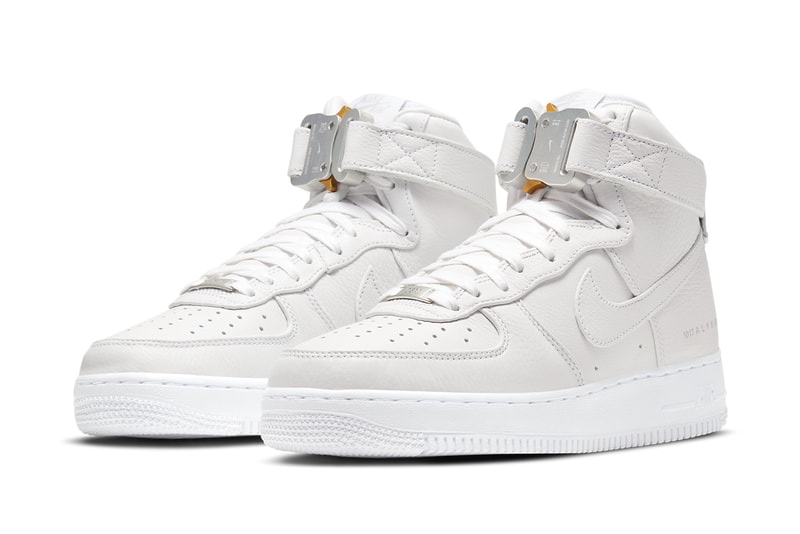 1017 ALYX 9SM and Nike are continuing their boldly-buckled collaborative work on the Air Force 1 High with a crisp sail colorway. Helmed by Matthew M. Williams — who’s also the creative director of Givenchy — ALYX is known for placing technical embellishments atop ultra-premium materials, an ethos that’s followed to a T here.

High-cut uppers are done up in original 1982 Air Force 1 style, with the collar rising well above the wearer’s ankle. From the toebox to the quarters and collar liner, the entirety of the build is constructed of ultra-premium sail leather. Signature detail is served by ALYX’s famous rollercoaster buckle on the leather proprioceptus belt. This buckle is done up in metallic silver with a gold release system and replaces the Force’s standard Velcro closure. A 1017 ALYX 9SM spellout is stamped on the lateral heel in metallic silver for an extra touch of branding, working in tandem with special silver lace deubres that state “1017” (right foot) and “9SM” (left foot). Down below, crisp white midsoles and outsoles serve up a tonal-style contrast to finalize the look.

Of course, this sail style is far from Williams’ and ALYX’s first dance with the AF1. It was premiered alongside three other styles ahead of 1017 ALYX 9SM’s FW20 runway at Paris Fashion Week in January, and Williams has also worked with the Swoosh on technical silhouettes like the Zoom MMW 4 and Free TR 3.

A release date has yet to be announced, but expect the 1017 ALYX 9SM x Nike Air Force 1 High to hit Nike SNKRS in the coming months.