Every trend forecaster tells you one thing about this season’s menswear: The 70s have returned. Yet, what could be a third time around for disco-influenced suiting and all-over graphics feels subtle and understated, as if you’ve got to think and look closely to get the reference. Those old enough may recall the 70s revival occurring during the 90s’ second half. As Tom Ford reworked Gucci’s aesthetic into slick, period-influenced clubwear, everyday clothing exploded with all-over digital prints, thicker footwear outsoles, wide-legged jeans, and pucca shell necklaces. Even pop culture looked fondly back, with Boogie Nights and The Last Days of Disco memorialising the decade’s second half and pop songs often getting a Eurodance-influenced disco-mix treatment. 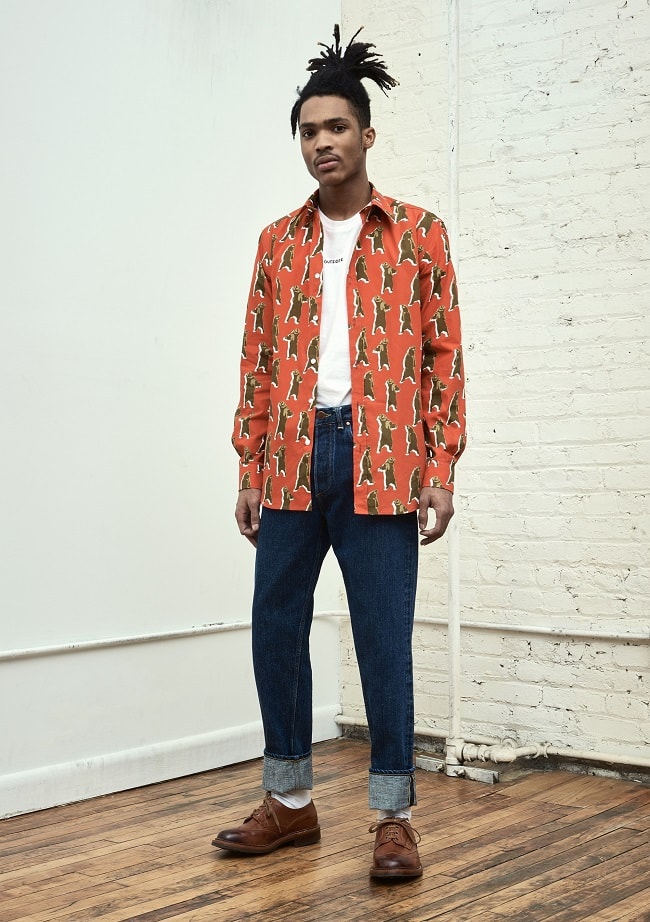 For AW17, on the other hand, the pattern repeats itself with a more sophisticated, mature perspective. Gucci still leads the way, with Alessandro Michele fusing disco, rock, and punk elements together with his vintage and streetwear-influenced collections. But, Michele doesn’t so much seem enamoured with the 70s as he does with youth – specifically, of someone, male or female, rummaging through a parent’s closet to try on and re-appropriate period styles for modern sensibilities. Essentially, he’s not trying to re-live the 70s; rather, Gucci borrows the aesthetic and attempts to not just improve upon it but further make vintage dressing relatable. In a sense, this outlook stretches across AW17 entirety, with designers identifying key period trends and retooling them. 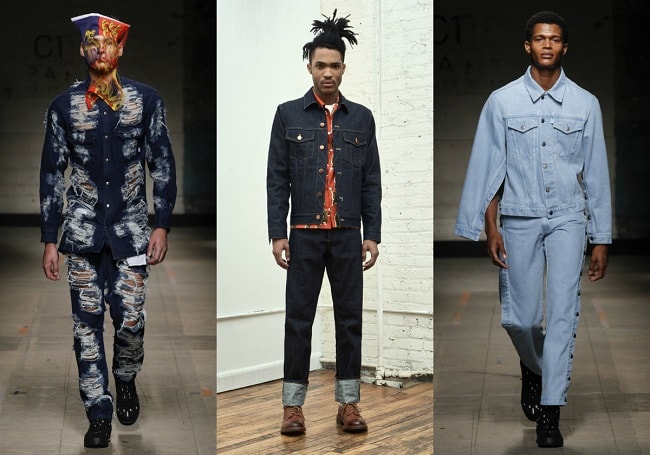 Any list of 70s pop culture-influenced trends always touches on the familiar and easily recognisable: Disco shirts and leisure suits à la Saturday Night Fever, platform shoes and colourful sunglasses likely influenced by Elton John, reactionary punk music and its deconstructed style, and the ubiquitous, gender-neutral bell bottoms. Double denim, unfortunately, gets lost in the mix, but it’s a good, if not accessible, place to start. What slips under the radar now, at a second glance, appears everywhere in the period’s films and pop culture and, for the modern man, really only takes two pieces. Double denim, through a modern lens, can be done in one of two ways. Firstly, as an Americana-influenced play on the leisure suit. Pair jeans with a denim jacket of a similar wash, ideally with a structured fit. To break up the monotony, bring a patterned button-down into the fold. But, to avoid projecting an intentionally vintage character, steer clear of wide-legged jeans. But, for something less matchy-matchy, go with an AW17 essential – the denim shirt – and contrast that against your jeans. Also to avoid that coverall combination, consider a lighter or dark wash for your shirt, and stick to the middle of the road for your bottoms. 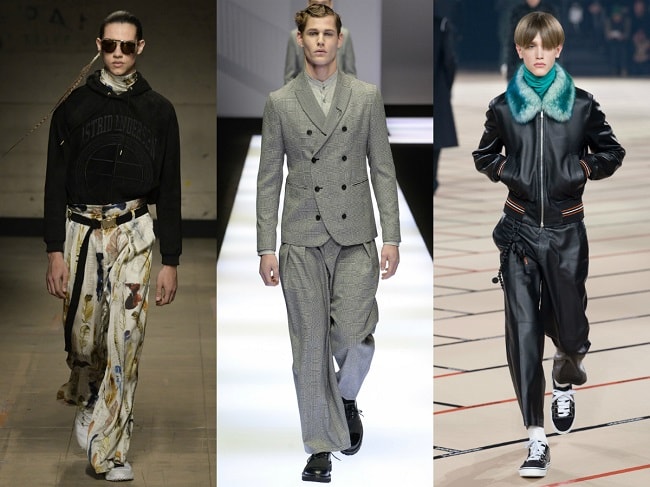 Why is it that wide-legged trousers seem so familiar? Although the 90s saw greater circumferences, the baggier fit and high degree of distressing still stand alone as their own period entity. On the other hand, today’s more structured cut channels the disco years, albeit through a more elevated perspective – like you’ve grown up but still hold onto part of your teenage angst. The key, though, to attempting this trend is evolution. For instance, wide-legged trousers with a matching blazer still reflect an ensemble out of Saturday Night Fever, and no one wants to walk into the office looking like he’s been out into the early morning at a retro club night. Instead, contrasts push it forward: Round out your look with a classic solid-colour bomber and slip in a striped or plaid button-down for a third element. 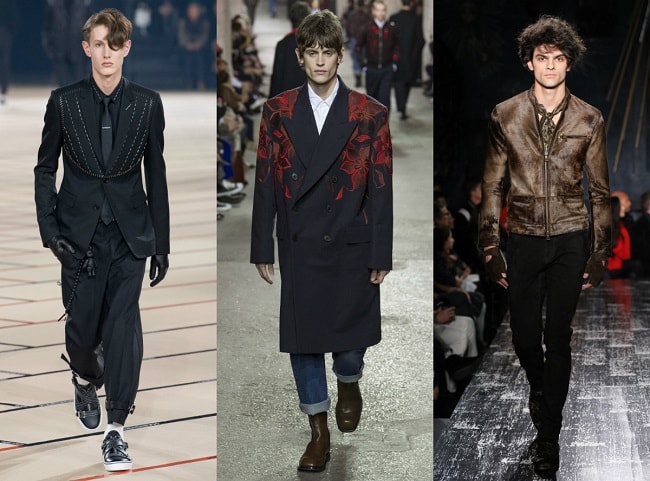 Much of what we currently associate with the 70s occurred in the decade’s second-half. The first few years, on the other hand, saw 60s styles – particularly, hippy fashions – extend their lifespan just a bit and then bleed out. Designers, for their AW17 presentations, realise this influence, with runway presentations grabbing and upgrading embellishments and cuts suited for a free-spirited, if not somewhat aimless, individual. On one hand, John Varvatos’ aesthetic, clearly referencing the period’s rock music and surrounding culture, brought back this reverence nearly five years ago. But, what could’ve been contained to a particular brand has spilled over. This past Fashion Week saw Roberto Cavalli and Berluti dabble with patchwork, fringe accidents, and velvet, while Tom Ford unveiled a shearling-trimmed jacket. 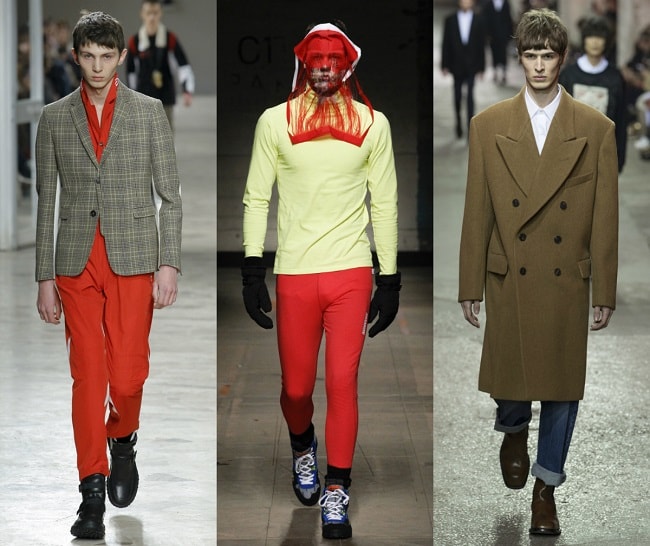 For those recollecting movies from the 70s, sepia-toned, sometimes hazy imagery comes to mind, as if everything in sight had been washed with a light shade of brown or splashed with a golden or burnt variation of orange. No matter which flick comes to mind, this ubiquitous aesthetic infected the period’s apparel – brown corduroy suits, for instance – and has found its way into AW17’s revival. Specifically, the season’s it shades fall into two camps. In one, earth tones span the gamut between light, tannish brown and camel to more substantial chocolate tones to reddish, rusty hues. In another, darker shades of orange transform what’s been perceived as an early 90s club shade into something practical yet concentrated and smouldering, as if to directly point to its increased depth. As a tip, though, avoid the retro trap by treating each group exclusively; combining them, rather, gives you the look of a period movie still in motion. 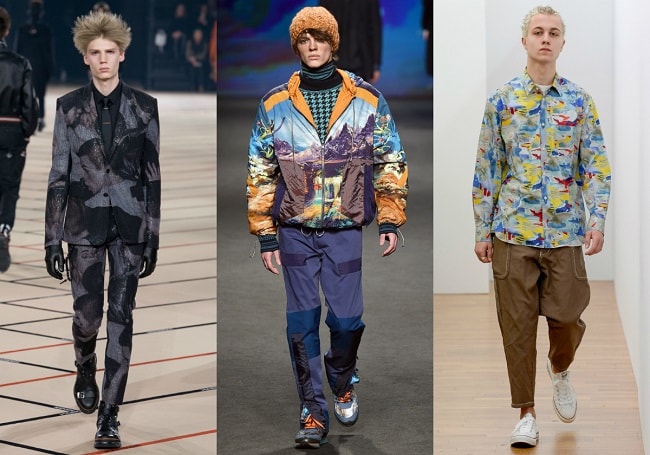 While the 70s, especially in menswear, gets a bad rap as a point in which style either stood still or almost intentionally delved into tacky, poor tastes, one facet continues to return: The disco shirt. Its framework, with a slimmer fit, stretchy polyester or lightweight rayon construction, and wide, stiff V-shaped collar, exemplifies the ultimate night out, hinting at the exclusive debauchery of clubs like Studio 54. Yet, it further represents another regularly resurfacing trend: the all-over graphic print. From a quick glance at any vintage shop, this garment sets the stage for boundless combinations: landscapes, geometric prints, photograph-based graphics, art deco and Americana imagery, and lots of repeating, heavily contrasting patterns. What was available then makes today’s supposedly boundary-pushing patterns pale in comparison, and as such, serves as inspiration for designers to reach even farther. And, through this approach of looking backward to get ahead, almost any graphic or print is now game – from plaid and stripes to placement prints and detailed florals.