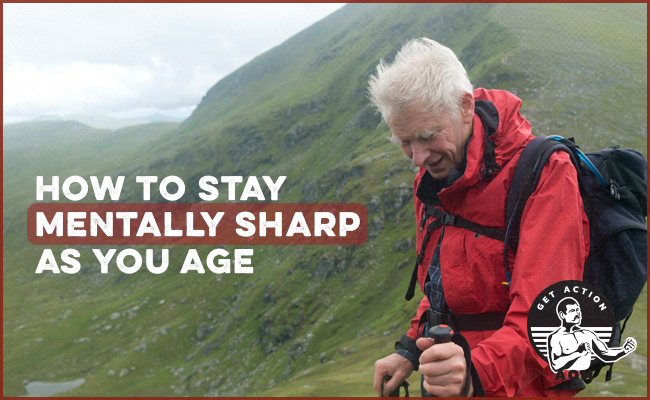 People have an almost universal desire to not only live longer, but to have the years they add to their lives be healthy, vibrant, and fulfilling.

A big part of making that happen is maintaining your physical fitness, particularly your strength. Muscle loss is a significant driver in decreasing life quality as you age. If you can’t pick heavy things off the floor, or get yourself off the floor, your ability to navigate life diminishes, and along with it, your sense of agency. Solution: keep on lifting heavy things and eating plenty of protein even as you get older.

Of course, having a fulfilling winter season of life is premised not only on your body staying fit, but on your mind staying sharp. You can’t enjoy being physically spry, if you’ve lost your marbles. Unfortunately, just as your muscle mass declines with age, so does your cognitive function. Fluid intelligence goes down, hampering your ability to think and improvise on the fly, and your memory gets rusty. Age-related cognitive impairment can be mild, wherein you simply lose your keys and forget names more often, or it can be severe, in the form of dementia, which can cause, in addition to serious memory loss, debilitating issues around communication, thinking, and behavior which rob an individual of the ability to perform everyday tasks.

While not all forms of dementia can be prevented, the solution to those that can, as well as to garden variety age-related mental decline, is much the same as the solution to age-related physical atrophy: exercise. Cognitive exercise. The mind is much like a muscle: you either use it or lose it.

In response to this recommendation, companies have popped up selling older people programs and apps that promise to exercise the brain in ways that will stave off cognitive deterioration. Just play a fun brain game for 15 minutes a day, they say, and you can stay mentally fit as you get older.

But the research doesn’t back up the claims of these brain-training companies. Instead of increasing overall cognition, playing these games just makes you better at those games. There’s no transfer to the real world.

So what does work in keeping you mentally sharp as you age?

According to cognitive scientists, the answer is simple: taking part in complex activities.

There are two such activities you can do that are 1) free, 2) enjoyable in and of themselves, and 3) disportionately effective in keeping your brain tuned-up: socializing with others and physically engaging in diverse environments.

Below we’ll unpack why you should prioritize these activities in your life — not waiting ‘til you’re a senior citizen to start, but beginning in your thirties (or earlier!); it’s easier to keep your mind fit all along and maintain established habits from youth to old age, than it is to reverse decades of degeneration and have to form new habits in your twilight years. (Though it’s certainly never too late to start!)

In our podcast interview with neuroscientist Daniel Levitin about his book Successful Aging, he highlighted research that social engagement helps maintain brain function and protects against cognitive decline as you get older. For example, individuals who keep working into their 70s and 80s tend to have less dementia than people who retire in their 70s. Older individuals who volunteer show similar cognitive benefits.

What is it about socializing with other humans, particularly face-to-face, that helps keep you mentally sharp?

As Levitin explained, “interacting with others is about the most complex human activity we can do. It’s more complex than brain surgery, than being a rocket scientist, than solving Sudoku or crossword puzzles. Interacting in a meaningful way with real live people, not necessarily over the phone or Skype, that’s demanding, and that keeps the brain active.”

Think about all the nuances and uncertainties, as well as the skills and aptitudes, that are involved in having a conversation: you have to listen, focus, remember what’s already been said, read emotions, empathize, give appropriate responses on the fly, and check your inappropriate responses. You have to stay on your mental toes; it’s a delicate and deft dance that maintains your brain’s metaphorically fancy feet. As Levitin notes in Successful Aging, face-to-face interaction “exercises vast neural networks, keeping them tuned up, in shape, and ready to fire.” What’s more, conversation keeps up your sense of curiosity, and allows you to learn new things, which is another thing that can help stave off dementia. In short, conversation is the ultimate brain workout.

Another way we can stay mentally sharp, while simultaneously staying physically agile, is to engage with varied, natural environments.

Walking on uneven ground, crawling under a low rock hanging, and balancing on a log are surprisingly nuanced physical movements, that involve surprisingly nuanced mental processes. As you make your way over more demanding terrain, your brain sends signals to your body, making lightning-fast modifications to your physical position so you don’t fall on your face. At the same time, the physical movements you make send signals back to your brain. In Successful Aging, Levitin describes this two-way dynamic, which creates a virtuous loop of neural stimulation:

Every minute you walk on an unpaved trail, whether in a park or in the wilderness, requires you to make hundreds of micro-adjustments to foot pressure, angle, and pace. These adjustments stimulate the neural circuitry of your brain in the precise way that it evolved to be used. The area that is most stimulated is your hippocampus, that seahorse-shaped structure that is critical to memory formation and retrieval. This is why so many studies show that memory is enhanced by physical activity. This way of looking at things is known as embodied cognition, the idea that physical properties of the human body, particularly the perceptual and motor systems, play an important role in cognition (thinking, problem-solving, action planning, and memory).

Unfortunately, as people get older, they have a tendency to silo themselves off from complex environments. Older people often only “traverse” the flat, even, unobstructed surfaces of home, stores, and parking lots, which gives their brains a lot less operational grist to chew on. As neurologist Scott Grafton notes in his book Physical Intelligence, when you take old people out of complex environments, they age more quickly, and this dynamic works on two levels:

First, as your time spent navigating complex environments decreases, so does your ability to handle variances in your environment that do pop up. Older people get so used to only walking on smooth floors, that when they do encounter things like rugs, curbs, or tree roots, they have a high likelihood of tripping and falling. The parts of the brain that could have helped them with recovery movements and balance have atrophied too far to activate and intervene. The resulting falls can cause serious injuries that older people’s bodies, and quality of life, never fully recover from.

What this all suggests is that to stay mentally sharp as you age, you can’t neglect the body-mind connection; you need to physically engage with stimulating environments, which are largely found outside the walls of home and office. As Levitin enthuses, when it comes to neural stimulation, nature beats the pants off a brain game app:

The number of variables—things that could happen to you—is infinite. You see it in the excitement of your dog. The varied terrain, the people, the vegetation, are all changing. The chance of running into people or things you haven’t encountered before, or haven’t encountered in exactly that way before, adds to the thrill. This was the kind of navigation our brains evolved to perform. This was the kind of embodied cognition that strengthens synapses and rejuvenates hippocampal memory systems, motor-action planning systems, and eye-body coordination.

Outdoors, anything can happen. And that’s the most potent way of keeping the brain flexible and active that we have so far discovered.

So take plenty of walks and hikes in parks and the wilds, and while you’re out there, balance on logs, crawl under low overhangs, and even climb a tree. Don’t be afraid to look like a weirdo! If someone asks why you, a grown man, are climbing a tree, tell them to bug off. You’re fighting dementia.

For more insights on staying mentally sharp as you age, listen to our podcast with Daniel Levitin:

The post 2 Keys to Staying Mentally Sharp as You Age appeared first on The Art of Manliness.