The holiday season is officially behind us, and for certain parts of the world, a couple of snow-covered months stretch ahead. So, is it too early to start thinking about what to wear for Spring and eventually summer 2018? As we lace up insulated boots and zip-up heavier weight wool coats, woven cotton and bright prints seem like nice thoughts to tide over the time being.

But, beyond the basics and classics, what trends are in store for late March and beyond? Based upon last year’s SS18 runway presentations, as well as early previews, we should expect some amalgamation of the following: 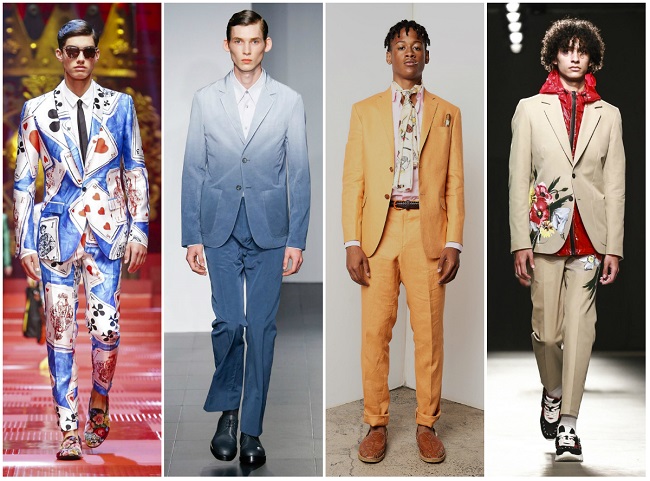 Nodding to the golden age of synthesisers and everything that came after, Dior’s SS17 collection gave us suits designed for going out and partying like its 1985. A year later, other designers have caught onto the casual suit concept, and infuse it with an array of pastel and neon-leaning shades not out of place in a Duran Duran music video. The same silhouette still stands: somewhat wider yet structured, and finished with a single-button, somewhat more relaxed jacket. 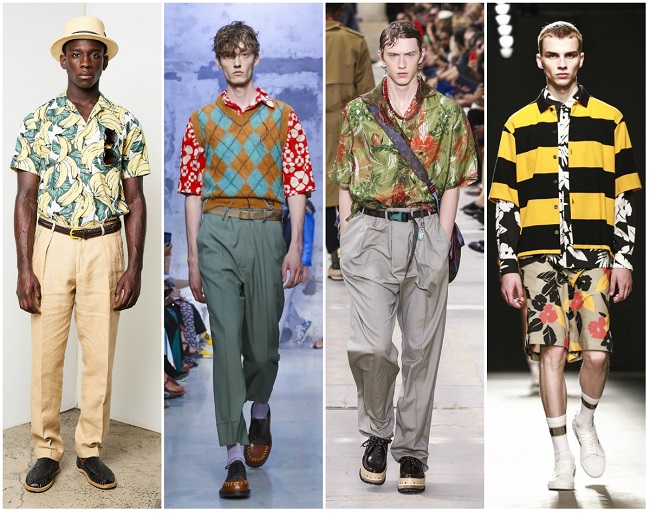 Of all the floral variations menswear has dabbled with, from silhouettes to roses to darker hues, returning to this ‘70s staple (and ‘90s revival) was inevitable. However, revisiting this time doesn’t involve garments on par with a cruise wardrobe or sweat-absorbing polyester. Although the prints themselves revel in their loudness and contrasting palette, the trend itself expands upon the sleekness of camp collar shirts. Thus, along this line, keep the cut slimmer and structured, and always tuck it in. 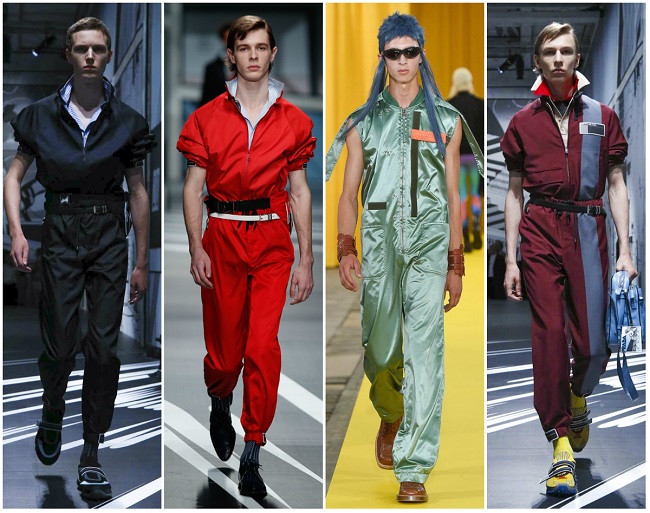 For a while, we’ve been hearing how one-piece ensembles are returning. But, beyond the ridiculousness of the RompHim, no one’s managed to do it particularly well – matching tops and shorts, notwithstanding.

SS18 might be a change of course. For one, runway presentations hint at a piece that pulls from multiple influences and manages to simultaneously stand on its own. There’s no ironic winking involved. Rather, the coverall silhouette forms the foundation, belting gives it structure, and bolder hues and all-over prints reference a ‘70s rock star character.

Along these lines, authenticity takes a bigger seat. No longer do designers simply look to workwear as an influence; instead, as we can see from Junya Watanabe’s collaboration with Carhartt, the experts get to have a say. What results, to some extent, has some practical value, whether from durable materials, protective properties, or even the number of pockets added to a particular piece. 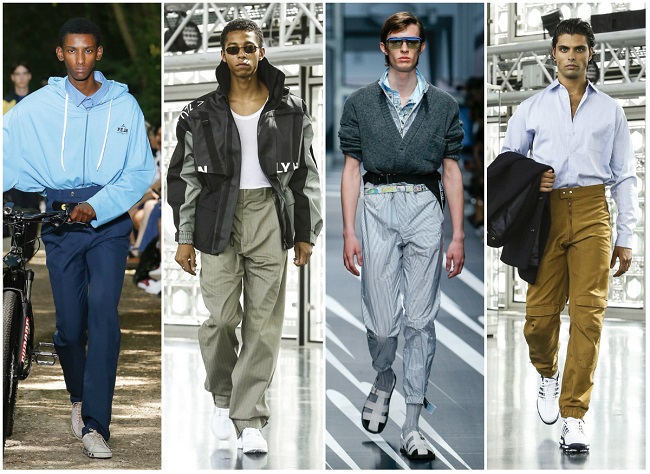 Over the past few years, we’ve seen dad caps and dad shoes, so why not a retro reinvention of denim, too? Normcore’s overarching vision zeroes in on unexceptional ‘90s attire – a decade, for the most part, when menswear felt like a footnote to the far more interesting things going on in women’s style. This yearning for simplicity not only manifests as high-priced basics, but further as overly expensive dowdiness. Case in point, what’s being called the “dad jean.”

You can’t get any more middle of the road: Wider-cut yet tapered, higher-waisted without a constricting fit, and mid-washed, without distressing, fading, or darker elements. If you’re old enough to remember a period when jeans were just that, no bells and whistles, this is essentially what you got. Demna Gvasalia is behind this revived trend, but if you study the runways, the whole wide-legged, high-waisted fit – almost reminiscent of Z. Cavaricci pants – is subtly ubiquitous. 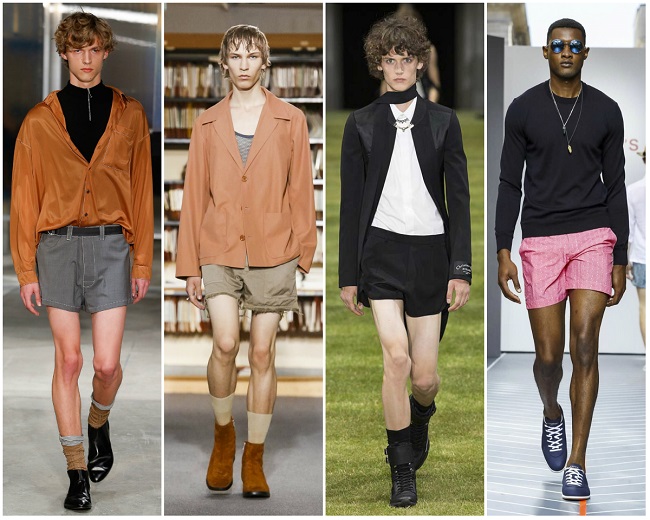 Call Me By Your Name is predicted to be an award-show powerhouse, but beyond the performances, lush Italian scenery, and score that blends classical with some synthpop, the coming-of-age story stands out for its effortless ‘80s fashion: Not tacky and forced, like something you would’ve seen on Miami Vice or in a Prince music video, but instead, everyday simplicity that comes through a sherbet-coloured short-sleeve button-down and wide-cut, shorter shorts.

For the past few seasons, we’ve been hearing how ‘80s fashion is going to make a comeback. Its emergence, on the other hand, is episodic and subtle and rarely indicative of a decade supposedly focused on excess. As such, whereas shorter-shorts could’ve referenced ‘80s basketball silhouettes, runway presentations first, and subsequently the Armie Hammer-starring movie. Go low-key: Solid shades, wider cuts falling mid-thigh, and higher waists. And, you won’t have to wear a half-shirt; a fitted tee or chambray shirt, tucked in, is just as no-nonsense. 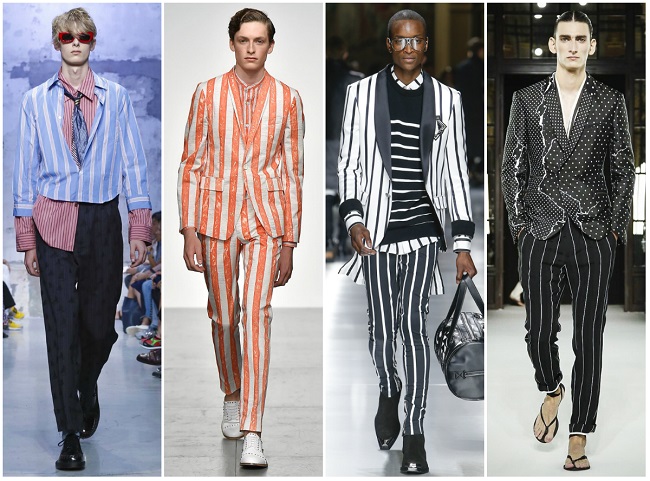 What’s so special about stripes? Usually, not a whole lot. Except, starting in SS17, designers showed us that this typically two-tone combination is open to so much more. So, we saw a greater range of colour pairings and widths, added over garments other than shirts.

SS18, then, is another step forward. Expect starker contrasts, sharp two-tone pairings, multi-coloured prints, uneven widths, and patterns on every possible item available, from trousers and jeans through blazers, bombers, and moto jackets.