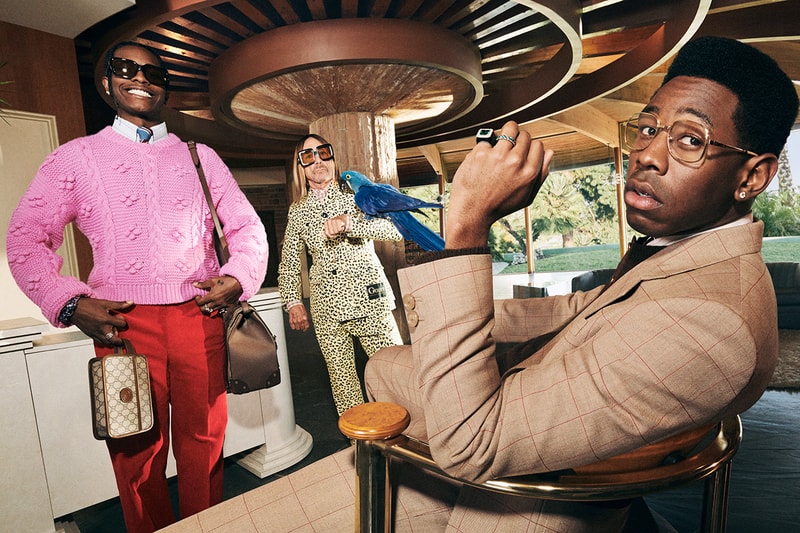 The ever-eccentric creations of Alessandro Michele at Gucci have been captured by Harmony Korine for the Italian label’s latest men’s tailoring campaign, “Life of a Rock Star,” starring A$AP Rocky, Tyler, the Creator, Iggy Pop, and Biggy Pop the parrot.

Shot in Los Angeles in February, the campaign images and video take place inside a Mid-Century Modern West Coast house that’s surrounded by lush plants and palm trees — the perfect setting for Iggy Pop’s parrot and its friend, a blue hyacinth macaw, to call home.

A$AP Rocky, Tyler, the Creator, and Iggy Pop also treat the pad like home. The two rappers turn up in an old Rolls-Royce and enter the home, joining Iggy Pop for a dance. The three goof around all while wearing Gucci’s latest tailoring collection, with Iggy donning a daring leopard print belted suit, green and blue three-pieces, and a tweed check suit, too.

Elsewhere, we see Tyler, the Creator pair Gucci’s red corduroy suit with a petrol blue ribbed roll neck and loafers. He also channels his inner Thurnis Haley with a green-and-gold “GG” link motif sweater vest, a striped blue shirt, and checkered pants. A$AP Rocky is the most dapper of them all, decked in a full striped “GG” motif suit, a black “GG” tuxedo, and more.

Speaking on the campaign, Michele said, “The result is a group campaign with three men who I believe had fun too. There is always this image of eccentricity, because they are in fact eccentric themselves. A certain type of fun is also portrayed and the idea of how one’s obsession with appearances can create a kind of common ground that can become a sort of brotherhood. It was beautiful to see these three men together, seemingly different but very similar.”

He added, “This is another chapter of this journey. With these campaigns, I am working on different ways of being elegant, and these three men embody this idea perfectly. I like to tell the story of elegance in completely arbitrary and unexpected ways. Perhaps elegance is something in the air that sometimes you are not even ready for. Male elegance can be unpredictable and strange.”

Take a look at the Harmony Korine-shot campaign images and film above, and expect the collection to drop at Gucci boutiques and on its website later this year.

In other news, MM6 Maison Margiela SS21 is here.