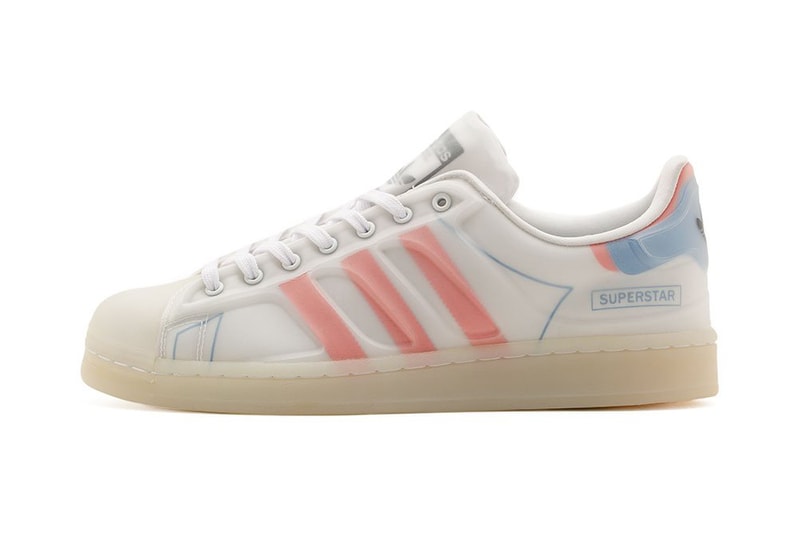 First released in 1969 as a high-performance basketball shoe, adidas‘ Superstar has lived many a life since then — both on the court thanks to legends like Kareem Abdul-Jabbar and in street culture by virtue of Run-DMC plus many others. Although it’s impossible to encapsulate such a rich history in a single product, adidas Originals‘ new Superstar Futureshell aims to tell a specific part of the story, namely the Superstar’s transition from hoop shoe to lifestyle favorite.

This ambitious undertaking is kicked off by the Futureshell’s unique dual-layer upper, which features a white base that’s fully encased in a translucent TPE shell. The see-through nature of this outer layer enables the base’s accents to shine through from front to back. Starting things off, the midfoot features a coral-colored Three Stripe graphic. Next, the forefoot and rear alike supply blue lined graphics and adidas text hits.

On the back, heels offer a double-stacked serving of colorful style, with a stroke of blue haphazardly covering a coral base. Standard black adidas branding retains its normal place on the tongue. A finishing touch is provided by milky midsoles and outsoles, the latter of which supplies a red “Future” hit on the right foot and a blue “Shell” embellishment on the left.

The adidas Superstar Futureshell is available now at retailers like Chmielna20, and is priced at zł500 PLN (approximately $134 USD).

For more from the world of the Trefoil, peep artist Jordan E. Moss’ take on the UltraBOOST DNA.