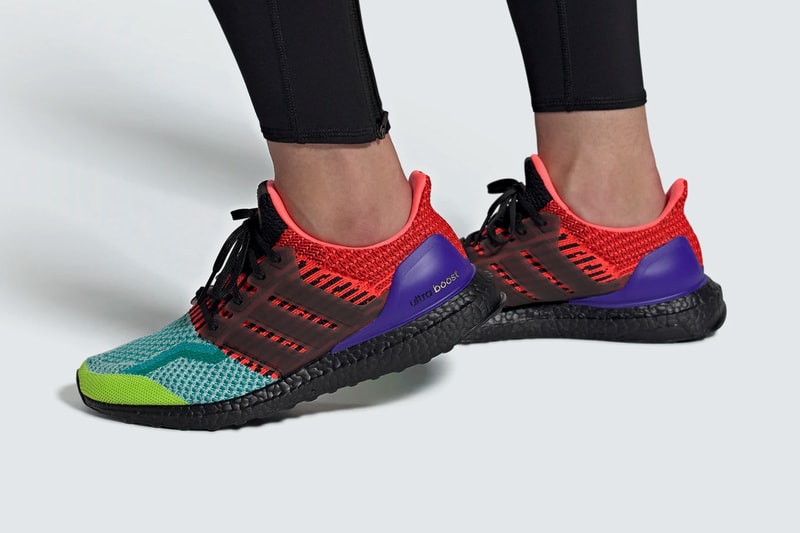 Although it’s still pushing peak performance with models like the UltraBOOST 20, adidas‘s ever-popular UltraBOOST line is also leaning into lifestyle with the UltraBOOST DNA — a “heritage” sneaker that’s now been revealed in a wacky “Solar Slime” makeup. Offering a bright, almost “What The”-style assemblage of hues that’s reminiscent of the UB’s past kolor collaborations, the “Solar Slime” is copiously colored and lavishly loud.

Full Primeknit uppers start with the eponymous “Solar Slime” hue on the toe cap, move to a soft teal on the toebox, then get vivid with a duo of reds on the midfoot and heel — the former of which offers black stripes, the latter a rich scarlet shade. The top half of the tongue simplifies matters with a monochromatic black build to match the black laces and the smoky, semi-translucent black midfoot cages.

On the heel, purple clips with black and gold lettering serve up a nod to the UltraBOOST’s very first colorway. BOOST midsoles are covered entirely in black, with red Torsion bars and black Continental rubber outsoles completing the style.

The adidas Ultra BOOST DNA “Solar Slime” will release via the adidas Canada webstore on October 22 and is priced at $180 USD. A global release date has yet to be announced.