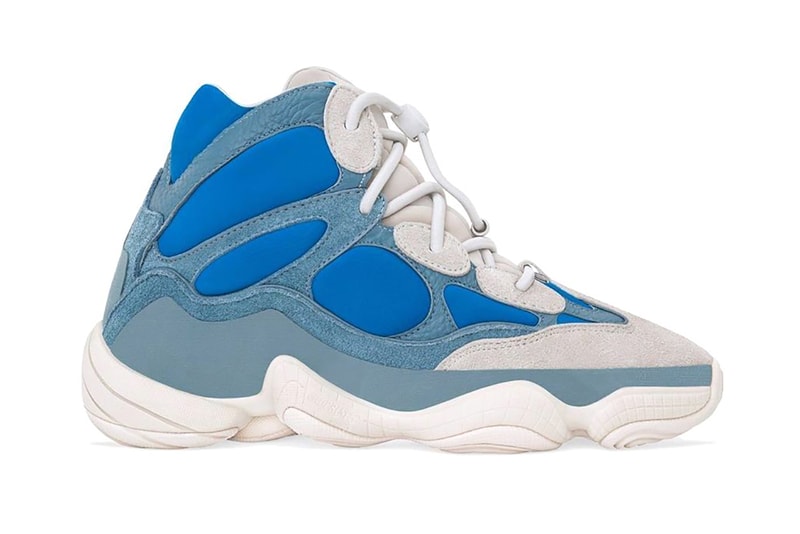 Since arriving on the footwear scene back in December 2019, the adidas YEEZY 500 High is a silhouette whose appearances have been rather occasional. However, 2021 seems as though that narrative will change because after dropping in “Mist Slate” and “Shale Warm” color schemes earlier this year, the model is returning to the stage in a cool “Frosted Blue” palette.

Unlike its predecessors which more so leaned on neutral and/or earthy tones to decorate its upper, this variation takes a bold departure and opts for a more vivid presentation. Puffed up Neoprene uppers peek out with their royal blue complexions and come balanced out with suede overlays and mudguards that are flooded with its titular shading. Elsewhere on the base, the laces, throat and interior liners complement with brighter beige pigmentation. Another detail to point out here is that the lacing system has been switched back to the toggle pull system just like its “Tyrian” sibling.

AdiPrene-cushioned sole units down below continue the neutral accenting theme and come prepared with a light beige coat.

According to YEEZY MAFIA, this pair will see a release in April 2021 and retail for the traditional $220 USD.

Elsewhere in the realm of sneakers, Kanye’s adidas YEEZY BOOST 350 V2 “Ash Pearl” has been unveiled.