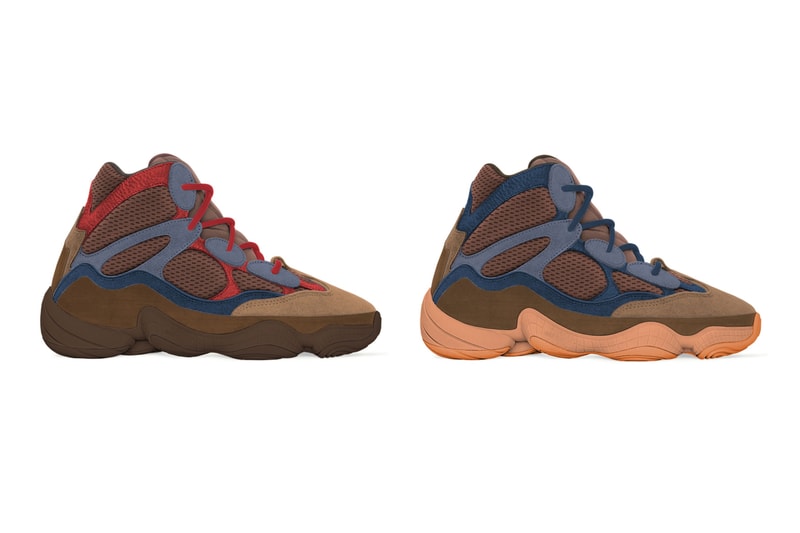 May and June are set to be eventful months for Kanye West and adidas‘ adidas YEEZY line, and two big pieces of those plans are the YEEZY 500 High in “Sumac” and “Tactile Orange.” Mixing familiar earthy base tones with vibrant accents, both of these high-cut YEEZY 500s continue the efforts of models like the “Frosted Blue” and “Shale Warm” by bringing more color to the line. However, unlike both of those counterparts each trades out the smooth neoprene-like material seen on most recent colorways in favor of a classic mesh construction.

On “Sumac” and “Tactile Orange” alike, both of these mesh builds are done up in a rich chocolate brown, overlaid with softer desert brown suede on the toebox and heel, and separated from the midsole by brown mudguards. Both also add rich navy to the suede midfoot overlay plus a blueberry-like shade on many of the eyestays and a heel piece. However, while the “Tactile Orange” keeps things consistent with navy on the remainder of its overlays the “Sumac” adds a vivid, glosy red into the mix for a dash of sporty flair not native to the YEEZY line. The script is flipped once again on the midsole, where “Sumac” keeps things simple with more brown and “Tactile Orange” earns its moniker with a creamsicle orange shade also seen on the YEEZY 500 “Enflame” and YEEZY BOOST 700 “Enflame Amber.”

Noted leakers YEEZY Mafia have reported that both the “Sumac” and the “Tactile Orange” will release on May 17, though this has yet to be confirmed by the Three Stripes. Each pair’s MSRP is set at $220 USD.