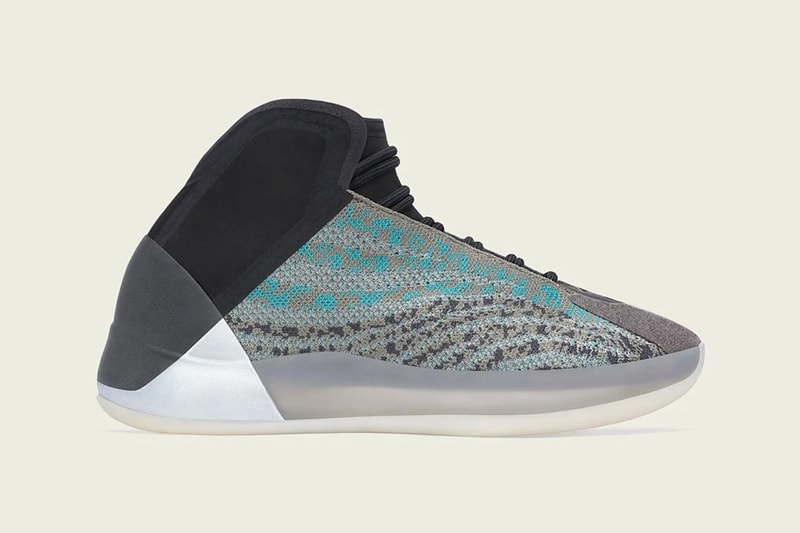 Kanye West and adidas‘s YEEZY QNTM has been shrouded in mystery, suspense and secrecy since making its official debut at NBA All-Star Weekend in February, but now the adidas YEEZY line is pulling back the veil on its most mysterious model with the release of a “Teal Blue” colorway. Formerly known as the “Ophanium” and arriving in full family sizes, the “Teal Blue” brings a sprinkle of bright color to the basketball-inspired sneaker.

Much like the QNTM’s launch colorway, the “Teal Blue” mixes multiple shades of gray on its knit upper and features a black heel, tongue and laces. However, the build is given new life by teal accents, sprinkled across the top half of the lateral and medial sides while contrasting with wavy gray lines and dark gray hits on the bottom half for a hypnotizing look.

There’s also a rich gray suede toebox detail, a la the YEEZY BOOST 700 V2. Large heel counters and the rear of the midsole are split between black and metallic silver, with the midsole’s remainder taking on a steel gray shade. A full-foot BOOST cushioning setup and milky outsoles supply finishing touches.

Noted leakers YEEZY MAFIA have reported that the YEEZY QNTM “Teal Blue” will release in full family sizes come October 10, though official word from adidas has yet to arrive. The MSRP for a men’s pair will be $250 USD, kids’ pairs are priced at $180 USD and infants’ pairs at $160 USD.