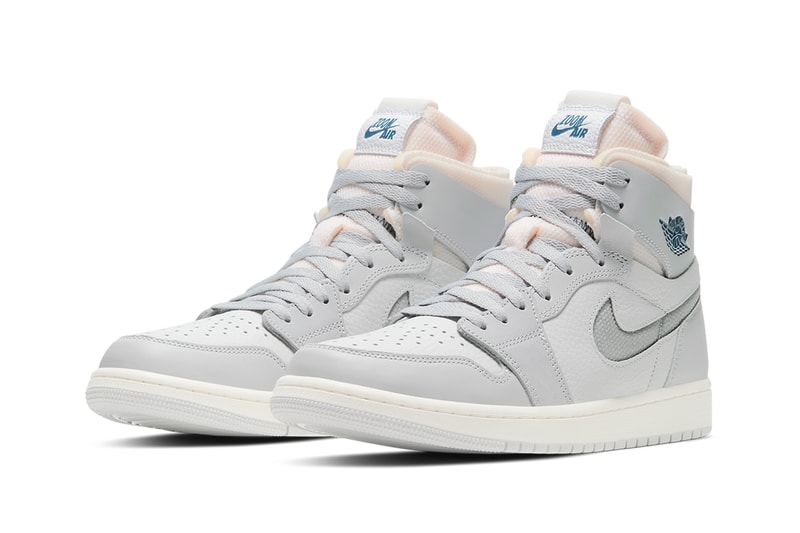 First introduced during Fall 2019 for the Jumpman family’s “Fearless Ones” collection, the Air Jordan 1 High Zoom has brought a sizable amount of energy to the sneaker market this year, and it’s being highlighted yet again for a CMFT makeup devoted to the city of London. Upon first glance, its palette may seem somewhat familiar, and that’s because its color ensemble carries similar elements to the Nike Air Max 1 “London” that dropped for the Swoosh’s “City Series” earlier in 2020.

A “Photon Dust” hue — a potential nod to the UK-based city’s oft-seen foggy weather climate — is visible upon the cut-out Swooshes and leather constructions that make up the mid-foot/toe boxes, as well as the overlays/ankle flaps. The first mentioned possesses tumbled textures while the latter is ironed out with a smooth finish. Further accents take charge through the Zoom tongue branding and ball-and-wings logos, both of which are dyed with a dark teal — likely to translate the Thames River — in addition to the pale peach tones that paint the mesh tongues and collars.

The midsoles are dialed to an eggshell-esque outer, and strung together by treading that matches with up with the base layer’s dominant hue.

A release date is still unknown, but Nike is expected to launch these for the usual $175 USD price tag in the coming months.