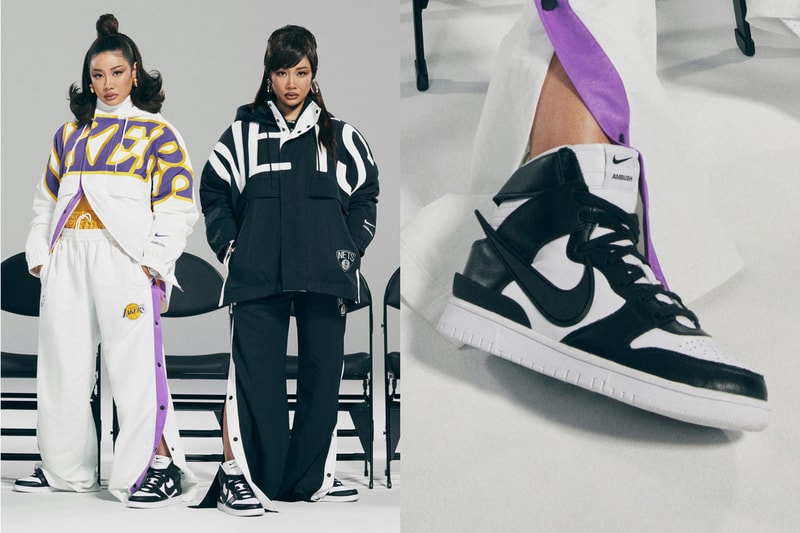 After its special Dunks were first teased at the Swoosh’s Future Sport Forum in February, official details for the latest AMBUSH x Nike capsule have been unveiled. A basketball and automotive-inspired assemblage from the mind of AMBUSH founder YOON, the offerings are centered around the colors of the NBA‘s Los Angeles Lakers and Brooklyn Nets. Apart from the interesting street-meets-sport style and recognizable colors, YOON’s latest collaborative project is also a unique milestone: it’s the first time that a female designer has worked in tandem with Nike and the NBA.

When choosing the Lakers and Nets — two influential teams from different coasts, both steeped in basketball and street culture — as the centerpieces of her collection, YOON referenced women’s street style in the ’90s. “I thought of all these amazing and strong female characters from the ’90s who would come out in men’s clothes,” she said. “I wanted to see how we could carry that attitude, but bring in more feminine forms.”

A high-cut Nike Dunk in white and black is the crown jewel of the collection. Though the yin and yang colorblocking is inherently, intentionally simple, the build is not. The overall silhouette is both elongated and heightened, with a signature detail arriving via rubberized midfoot Swooshes that jut out well behind the heel. This piece is directly inspired by motorcycle tailpipes. “I thought, ‘how can I make the shoes almost look like this moving thing?’” said YOON.

On the apparel front, all pieces are done up in a Lakers purple and gold or a Nets black and white. Two sizable puffer jackets are adorned with gigantic team wordmarks, while warm-up pants are given a winterized twist by way of insulated liner and double color waistband — the latter of which aims to replicate the look of game shorts peeking out from under pre-game warm up suits. Tight-fitting longsleeve tops round off the offerings by nodding to the aesthetic of classic jerseys. “The project began with a conversation about making women feel proud to represent their favorite teams,” sid YOON. “We were considering how to balance the culture of the sport without losing style.”

The AMBUSH x Nike NBA capsule is set to release on the Nike webstore and Nike SNKRS come December 11. Retail prices have yet to be announced.