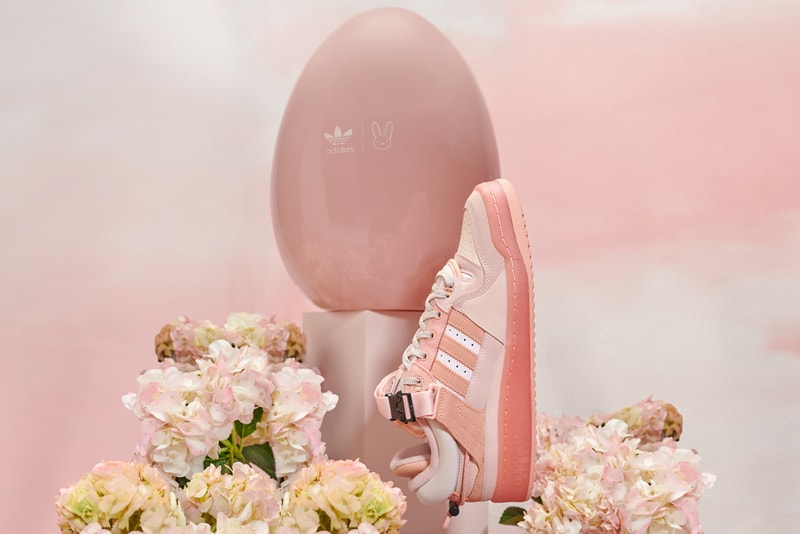 Bad Bunny and adidas have officially announced their second collaboration following : a Forum Low “Easter Egg.” Following in the footsteps of a coffee-themed Forum Low “The First Café,” the “Easter Egg” is a cheeky, seasonally-appropriate release that was first teased last week and plays off Bad Bunny’s name, the Easter Bunny and Easter Egg hunts.

To sum things up succinctly, the Easter Bunny has some serious competition this year: BB’s new Forum features an eccentric upper, made of premium pink leather that’s overlaid with supple pink suede. Various pink shades are used throughout this assemblage for tonal contrast, and a signature strap with a black rollercoaster buckle sits atop the tongue.

Beneath this buckle lies another of the shoe’s signature details: a doubled-up tongue equipped with the reggaeton superstar’s now-familiar eye graphic on the removable top layer. This embellishment is known as “El Ojo” (“The Eye” in Spanish), and if you open the buckle’s strap you’ll see “Yo Visto Asi” tucked in its velcro folds — a saying that translates to “I dress like this” or “I dress this way.” Down below, the look is rounded off with icy pink outsoles.

So far, the partnership between Bad Bunny and adidas Originals has been all it was cracked up to be. The aforementioned “The First Café” sold out instantly, and is now going for anywhere from $475-$2,000 USD on aftermarket sites like GOAT. With resell prices in the four figures before its release and an instantaneous sellout all but guaranteed on release day, the “Easter Egg” is looking to continue that trend.

Look for the Bad Bunny x adidas Forum Low “Easter Egg” to release via the adidas CONFIRMED app and at select retailers on April 4 before rolling out across most of Latin America on April 6. The MSRP is set at $140 USD.

For more from the world of adidas, check out on-foot shots of Kanye West‘s forthcoming YEEZY BOOST 350 V2 “Mono Mist.”