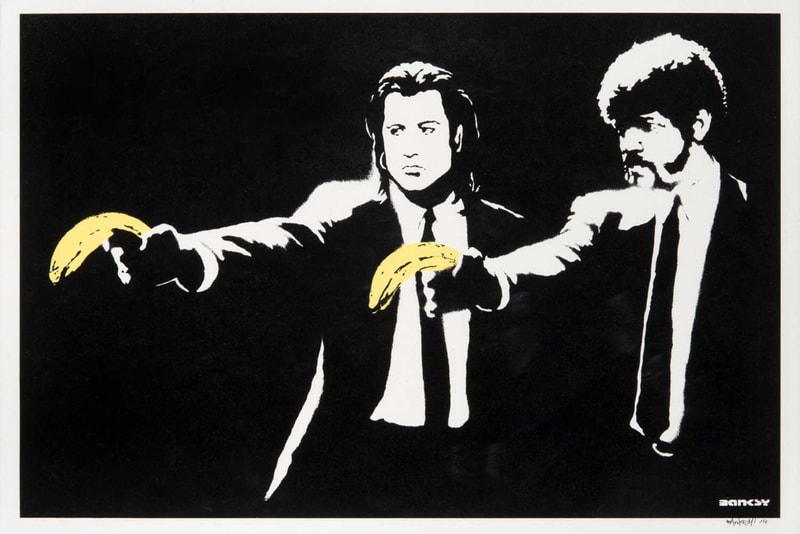 Tate Ward recently launched an online auction dedicated to the sale of diverse works in contemporary art and beyond. Titled “By Collectors for Collectors,” the lots featured works by Andy Warhol, Keith Haring, Anish Kapoor, Damien Hirst, Cy Twombly, among many others.

One of the highlights of the sale was a 2004 print by Banksy titled Pulp Fiction which is an hamage to the cult 1994 American neo-noir, dark comedy crime film directed by Quentin Tarantino. The work portrays John Travolta and Samuel L. Jackson in their suit-clad roles of Vincent Vega and Jules Winnfield, respectively.

Banksy’s Pulp Fiction snapped up £125,000 GBP (approx. $166,331 USD). The piece first appeared in 2002 near the Old Street tube station. The print was visible until 2007 when Transport for London painted over the wall. When the mural was covered, a local artist spray-painted the words “Come Back” in its place, addressing the note to Banksy. The elusive artist re-tagged his Pulp Fiction in the same place, but this time, the characters were holding actual pistols and dressed in banana costumes instead of suits.

Last month, the East London auction house sold Banksy’s Thrower for over $200,000 USD — a record for the print which has never been sold publicly.

Elsewhere in art, the UCCA Center in Beijing is hosting a group exhibition featuring augmented reality artworks by KAWS, Olafur Eliasson and more.