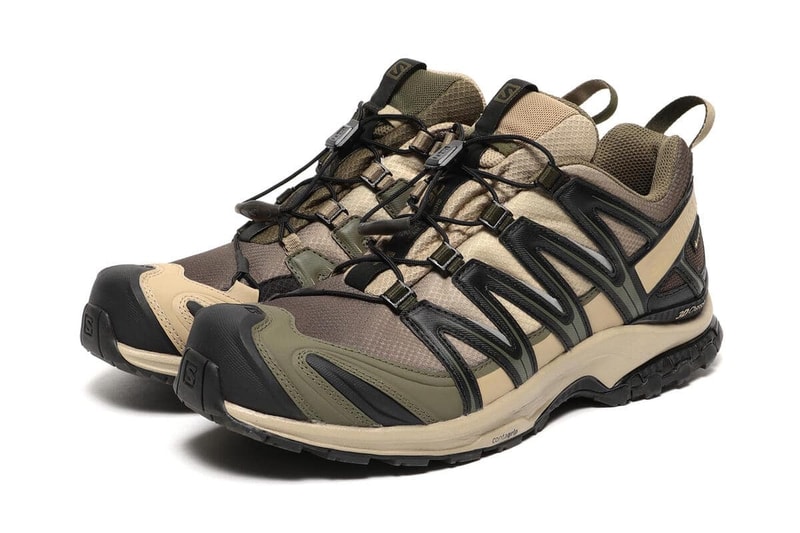 Japanese retail outpost BEAMS and French sportswear company Salomon have joined forces for a rugged XA PRO 3D GTX hiking shoe. This isn’t the partners’ first go-around with the high-tech, high-durability hiker — they released a crisp white/grey iteration in 2019 — but this new collaboration swaps out the airy hues of its predecessor for a more earth-toned look.

Every inch of the rugged hiker is packed full of tech, starting with a full GORE-TEX liner that ensures a waterproof fit. A wild assemblage of zig-zagging overlays holds an elastic toggle lacing system, and toes are bolstered with a hard rubber cap. Down below, Salomon’s proprietary 3D Chassis provides all-direction stability and support, while a toothed ContaGrip outsole handles traction on any terrain.

From a looks standpoint, each shoe blends tans and brows with black and olive accents. However, it’s no mere earth-toned layout: the colorblocking is asymmetrical, with each foot offering the inverse of the other for a bold but not overpowering yin and yang.

The Beams x Salomon XA PRO 3D GTX is available for pre-order on the BEAMS webstore now, and will ship in late September. The MSRP is set at a tax-included ¥26,400 JPY (approximately $249 USD).

Moving from the trails to the streets, Ronnie Fieg‘s KITH has reunited with Nike for a New York-themed Air Force 1 collaboration.