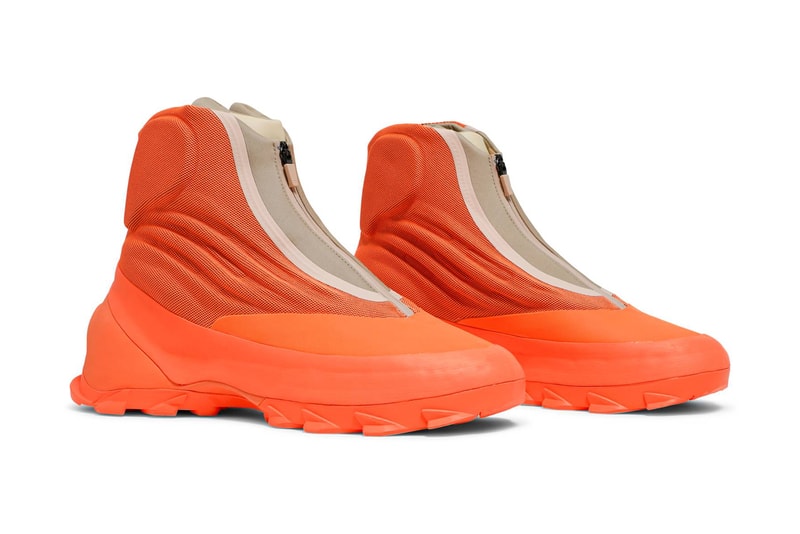 Among the plethora of unreleased YEEZY boot styles created by Kanye West and adidas, few — if any — command more attention than the YEEZY 1020. Though it’s been teased, leaked and speculated upon ad nauseam, there’s still never been any proper release information announced. We may still be waiting on the day that ‘Ye decides to bless his boot-wearing acolytes with the design, but in the meantime a closer look at the 1020 has arrived courtesy of GOAT.

A high-top, hike-ready design that also seems to pull some inspiration from basketball shoes, the 1020 arrives in a two-tone orange and tan colorway. The former shade is spread around the shoe’s lower half and most of the strikingly-shaped upper, while the latter is relegated to the tongue and the throat’s zip closure.

The 1020’s most striking detail is present on its midfoot, which cleverly works in a Three Stripes-style graphic with a trifecta of wavy lines. Circular shapes on the ankle give more structure to the collar, and the toebox is covered by a durable rubber. The upper’s base layer is cocooned in a protective shroud that can be opened and closed by way of a zipper that runs from tongue to forefoot. Finally, thick midsoles and lugged outsoles are constructed of high-quality Continental rubber to complete the look.

Official release date and pricing information for the YEEZY 1020V has yet to be announced. However, the presence of a sample pair on the GOAT webstore may point to a release later this year.

Looking for more footwear news? Check out the latest installment of Sole Mates, in which designer Mr. Bailey explains why he loves the Nike ISPA Road Warrior.