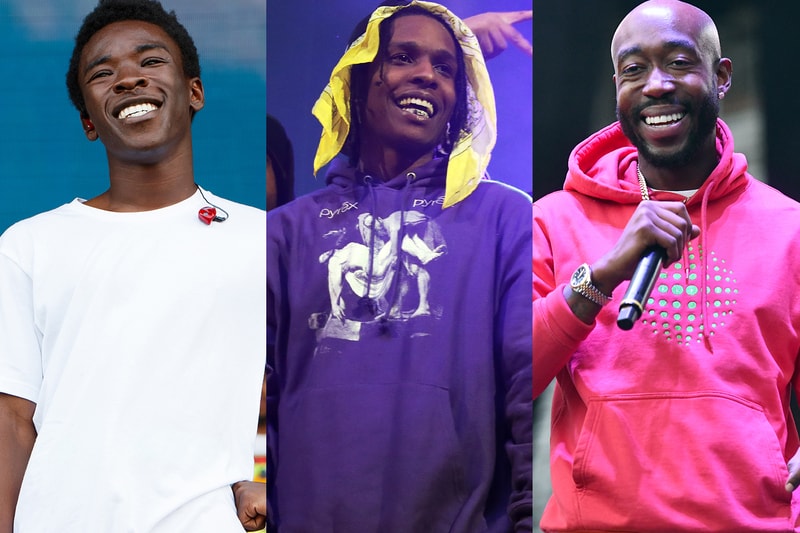 This week’s list is led by a collaboration between BROCKHAMPTON and A$AP Rocky off the group’s forthcoming record, a new single from Freddie Gibbs and two Hitler Wears Hermes 8 cuts from Westside Gunn. Also joining this selection are Lil Tjay, Tobe Nwigwe, Quell Chris and The Alchemist, Mustafa, AG Club, oddCouple and Jamila Woods and Guapdad 4000 and Sainvil.

BROCKHAMPTON enlisted A$AP Rocky for their first ever collaboration, “COUNT ON ME.” The two-and-a-half-minute track follows the release of last week’s “BUZZCUT” with Danny Brown, and both cuts are set to appear on the group’s forthcoming album ROADRUNNER: NEW LIGHT, NEW MACHINE.

Freddie Gibbs is celebrating the Easter tradition with his new single “Big Boss Rabbit.” Produced by Swaggyono, the track hears a sample of Mike Tyson’s post-fight interview after his February 1989 fight with Frank Bruno, while Kane delivers bars that remind everyone he’s not a man to be messed with.

Westside Gunn is prepping to release his Hitler Wears Hermes 8 mixtape, Sincerely Adolf, with the release of two singles entitled “Julia Lang/TV BOY.” The upcoming project will be his first since his Shady Records debut WHO MADE THE SUNSHINE? and follows up 2019’s Hitler Wears Hermes 7.

The followup to his 2019 debut True 2 Myself, Lil Tjay has returned with his 21-track sophomore effort Destined 2 Win. “The reason I named the album Destined 2 Win cause I always felt like I had something in me that was going to be great. It’s just a body of work to highlight my accomplishments,” the Bronx rapper said in a statement. “I’m still trying to figure out my lane. Whatever happened in my life is what got me here. If I didn’t go through some of these experiences then I probably wouldn’t be myself. There’s always obstacles, I’m pretty sure there’s going to be more obstacles and I just know I’m going to be able to fight through it. You know? Destined 2 Win.”

oddCouple has reunited with “Love Above” collaborator Jamila Woods for the new track, “Reflections.” The cut is set to appear on the Chicago artist’s upcoming album of the same name and “serves as both a personal thesis statement, and a return to the forefront.” He continues, “It’s only right that after working on this record for years, and growing so much as a person, that I’m able to create this with my most trusted collaborator, Jamila.”

Houston’s own Tobe Nwigwe delivered “A REVEALING FREESTYLE” as his third release of the year, following “GIVE IT BACK” and “Wake Up Everybody” — the latter being a part of the Black History Always – Music For The Movement Vol. 2 EP from February 2021.

Mustafa (also known as Mustafa the Poet) dropped off a new single and accompanying music video entitled “Ali.” A tribute to his childhood friend who he lost at 17 years old, the artist goes back to his neighborhood of Toronto’s Regent Park for the emotionally striking self-directed visual.

Following a collaboration on The Alchemist and Armand Hammer’s HARAM, Alc and Quell Chris have teamed up for the cut “Iron Steel Samurai.” The latest single is part of the Mello Music Group’s compilation album Bushido, which also features the likes of Apollo Brown, Oddisee, Skyzoo and more.

Alamo Records’ Sainvil enlisted Guapdad 4000 for his new cut “Ashley,” a track that’s billed as a celebration of Black women and the traits that make them amazing. “I named the song after a crush I had on a gorgeous girl named Ashley when I was a kid,” the R&B/soul artist said in a statement. “This song is about appreciating and uplifting the Queens that teach, love, protect, and fight for us Black men. Something they can have fun getting dressed to all summer, but ultimately celebrates and disarms colorist notions among a group of beautiful people.”

Bay Area collective AG Club (Avant Garde Club) has dropped off the first part of their debut studio album, Fuck Your Expectations. The nine-track record hears the group team up with Sam Truth, redveil and ICECOLDBISHOP, while its followup, which is set to drop April 23, will include “MEMPHIS (Pt. 2)” with NLE Choppa and A$AP Ferg.