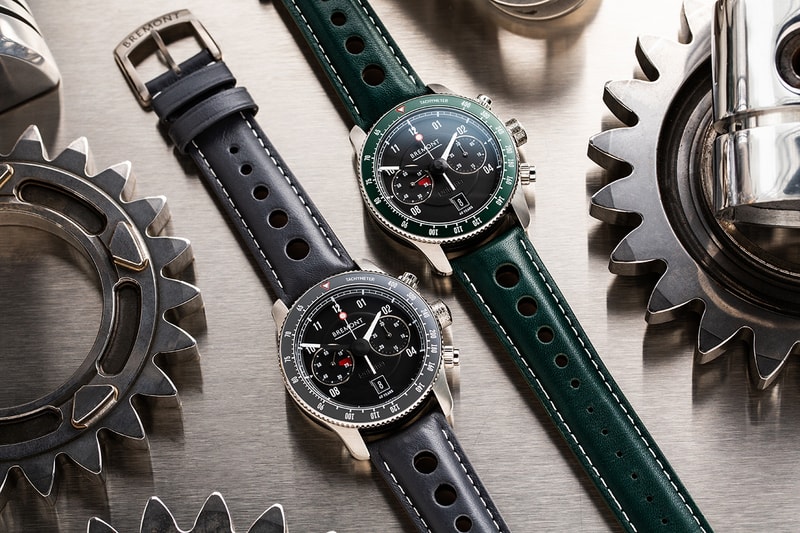 British watch manufacturer Bremont is marking the 60th anniversary of Jaguar’s iconic E-type with a boxed set including a chronograph and the company’s first ever Rally Timer.

The Rally Timer features two entirely separate mechanical instruments; on the left a stopwatch with tachymeter and on the right a clock with small seconds.

Both are mounted an engine-turned backplate which can be displayed on a desktop stand or fitted into a car. The set also includes a driving experience with Jaguar Classic, which will allow owners to get behind the wheel of three E-types at Jaguar Land Rover’s Fen End proving ground in Warwickshire, England.

Bremont is creating 120 sets, split between 60 including the 43mm limited-edition Bremont E-type featuring a ‘Drop Everything Green’ bezel and strap and the other 60 in ‘Flat Out Grey’.

The chronograph’s black dial is directly inspired by the E-type’s instrument gauges and its hour and minute hands replicate the car’s tachometer needle.

When it was revealed at the 1961 Geneva Motor Show, the 265bhp, 3.8 liter straight-six gave the Jaguar E-type a top speed of more than 150mph but at a price that was half of the equivalent Aston Martin or Ferrari, with Enzo Ferrari himself later describing it as ‘the most beautiful car ever made’.