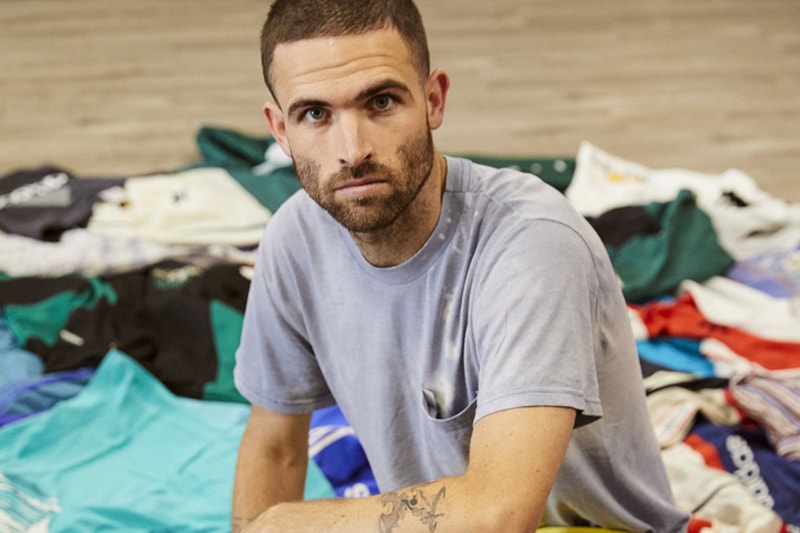 Sustainability is more than a buzzword to Sean Wotherspoon. The self-described “plant-based designer”, who has been a vegan for almost 7 years, has long been on a mission for change, raising awareness of the harmful effects we as humans are having on our planet as a whole through each and every one of his products.

For his latest release, Wotherspoon has turned his attention to the iconic adidas Originals ZX silhouette for a rework that’s set to land later this week. Boasting a patchwork-like upper of textured cotton fabrics, the ZX 8000 SUPEREARTH, as it’s dubbed, features the archetypal Three Stripes alongside a frayed aesthetic reminiscent of the pair’s previous Superstar release last year.

Now, after months of rumored release information since Wotherspoon teased it on his Instagram last year, the ZX 8000 SUPEREARTH has been given an official launch date of April 16. Ahead of the drop, HYPEBEAST sat down with Wotherspoon for a chat about his current thoughts on sustainability in the world of footwear, how he’s found working with adidas Originals, and the big steps he’s taking towards a more sustainable way of working in the future.

Everyone has different reasons for wanting to be sustainable and differing levels of importance, but how important is sustainability to you?

The idea of being sustainable is super important. It’s also important to realise that it’s almost impossible to create something that really is fully sustainable. But with the adidas Originals projects, we’re constantly working towards this. It’s something so far in the future that we’re taking every necessary step to try to build towards this sustainable idea within design, footwear and streetwear.

I’m designing a shoe now that’s not gonna come out until late 2022, which shows that nothing comes in 24 hours. Everything has a crazy lead time and it’s the same with helping the earth, it’s a crazy lead time but until you pick a starting point, we aren’t doing anything. We can keep brushing it off because it’s so far in the future, but we’re going to reach that future before we know it and it’s going to be too late.

The best thing we can do right now is give people access to information. Whether you’re creating sustainable products or vegan products, or even printing a message on a T-Shirt, it’s important to spread the message so everyone can make their own decision on whether they want to be a part of it or not.

When did you realise the importance of sustainability?

Every year I was realising how my decisions were affecting the earth, and how there are millions of people like me making the same decisions. As much as you feel like it’s only you working towards something, you have to remember there are so many people doing the same thing, subconsciously working together.

Then in 2016 when I had my first opportunity to work with a brand and design product, I suddenly had a platform and it was my chance to talk. It means so much to me to relay what I believe into a product, that’s why a lot of my designs — whether sustainable in its design or not — will have a message that’s important. It’s access to information that’s huge. If there’s an oil spill, you see it. If someone’s dumping nuclear waste into the ocean, we see it. Before we weren’t seeing this stuff so there was no pressure. We didn’t know it before because it wasn’t at our fingertips on social media, but it’s moving so fast now.

You have an abundance of experience working in the footwear industry in a sustainable way. How did you bring this experience to this collaboration with adidas Originals?

The brand was already doing so much anyway, so I was just another piece to the puzzle that came in to elevate it in a different way. I want to show people that it can be cool to be vegan. It can be cool to care about the earth, it’s not a hippy-dippy thing. Although I might define myself as a vegan or plant-based designer, it’s like my product is no different to any other designer, it’s just a different material make-up.

“As much as you feel like it’s only you working towards something, you have to remember there are so many people doing the same thing, subconsciously working together”.”

How did adidas Originals help out with the sustainability focus?

It was more like how I helped out. They’re already doing so much. I was able to come in and focus on earth. Like, I wanna talk about it all as one big picture. I’m trying to say, maybe I’m a large platform that can come in and help spread this message. That’s what I’m hoping I can help with. I want to be a positive piece in the puzzle that’s going to elevate what the brand is already doing. I fell in love with every sustainability project adidas is doing. Everything has so much meaning. I want to be a part of it and I want to help push this.

How was it working with adidas overall?

You can look at sustainability in so many different ways, but the way in which adidas is working with myself and its other partners is in a very sustainable manner. We aren’t exchanging a bunch of banter back and forth, they aren’t putting red tape on everything I wanna do and making my life tough — and this is important. People think sustainability is just about helping the earth, but there’s financial sustainability, physical sustainability, emotional sustainability, you have to make sure everything is one big picture of sustainability. It’s not just something that’s getting rid of a carbon footprint.

You’ve worked with a bunch of brands throughout your career so far, but how did this compare to other collaborative projects you’ve worked on?

You think everyone wants to put a ceiling on what you can do, but adidas is very well connected from the top to the bottom. We wouldn’t be able to create this product without this way of working and it’s something that’s really stood out to me. They make things easy. I’ve never got off a call and been like ‘man I’m losing sleep over this adidas sh*t’, I’m always infatuated with the relationship. Working with adidas just feels right. We’re working on so much stuff and huge projects right now, everything that’s forward-facing for the consumer right now is essentially a small step towards our big step. You won’t see our big step until five years down the road. I just want to make sure I’m along for the ride.

“I’m designing a shoe now that’s not gonna come out until late 2022, which shows that nothing comes in 24 hours. Everything has a crazy lead time and it’s the same with helping the earth”.

Where do you see yourself in five years time on a personal level when it comes to sustainability?

I see myself solely working with adidas. I work with a lot of brands right now because I’m a new designer, I’m new to town, and I’ve been lucky to do a bunch of different things growing up. I want everyone to know who I am and I think I’m ready to focus on one brand and give them everything I have to give. Maybe you could even call that working in a sustainable way?

What can we expect from you and adidas Originals in the future?

There’s so much dope sh*t coming up. I designed like six shoes last year for them and no one has seen them. We have some heat coming out. I’m bringing back a section of adidas that hasn’t been out for quite some time. If you know anything about me, there’s one thing in life I love so much and that’s going to be a big part of my next shoe that comes out after the ZX. This next shoe that comes out, it’s never existed before. It’s exciting.