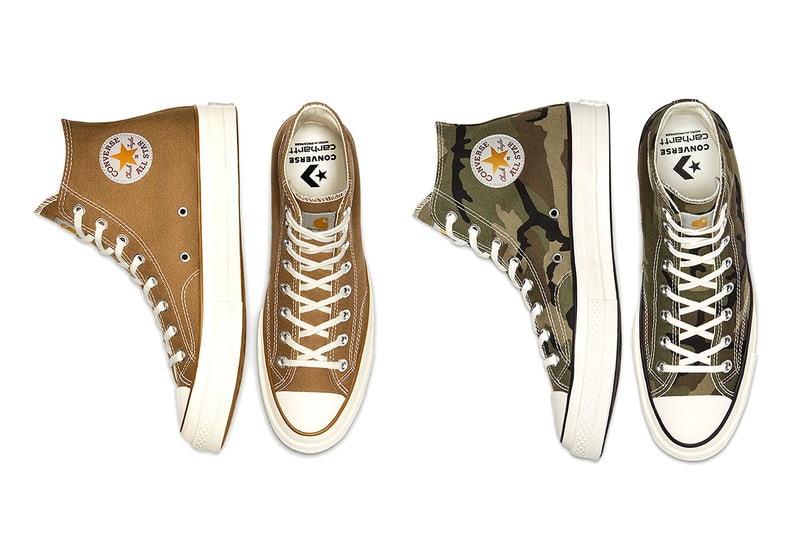 Converse is one of those footwear brands that never shies away from collaborations, and this season, it will be reuniting with one of its long-time partners in Carhartt for another collection that enlists the ever-classic Chuck 70 Hi. The collection is brought to light not too far out from when its impending range with Bandulu was revealed.

If the colorways shown here spark any sort of familiar memories for you, that’s probably because the two parties have presented near-identical palettes to the Carhartt x Converse Chuck 70 Lows that were restocked back in April 2020.

First on the assortment’s roster is the “Hamilton Brown” makeup, which takes its titular hue and allows it to stain the entire canvas body as well as the glossy trimming that resides just above the midsole. Patches are split between the traditional One Star patch on the medial side, as well as the workear maven’s emblem which rests on the tongues. From there, “Egret” takes care of the rest of the real estate and coats the shoe strings, toe boxes and midsole units.

Its release sibling lies on the more adventurous side as its upper is ornamented with a muted camouflage that blends black accents with “Covert Green” and “Dark Earth” graphics. Toe boxes and midsole units are presented in the same vein as the “Hamilton Brown” installment, leaving the main difference to come from the shiny black trim that sits above the bottom piece.

Expect these colorways to launch on February 4 via Converse and select retailers like Fenom for $120 USD.

Elsewhere in footwear, the Rick Owens x Converse TURBODRK Chuck 70 has been revealed.