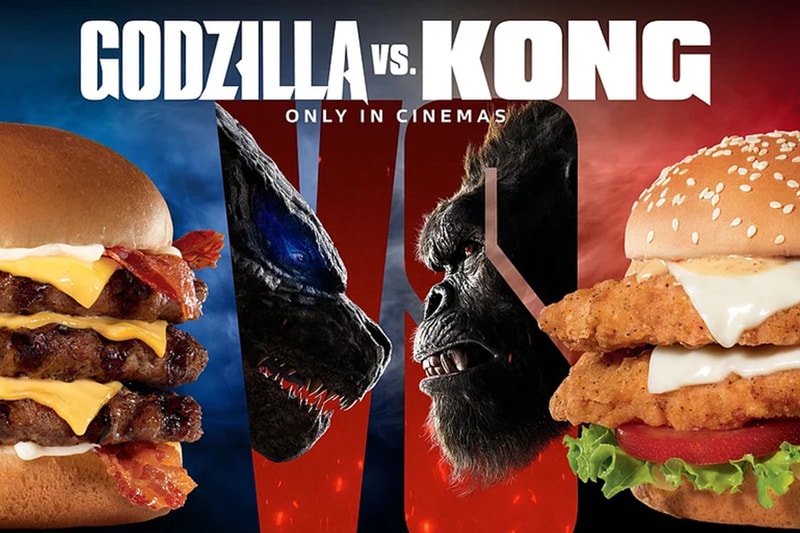 In collaboration with Warner Bros. and Legendary Entertainment, Carl’s Jr. and Hardee’s introduced a special-edition menu with two massive burgers promoting the film Godzilla Vs. Kong.

The Godzilla edition is a triple bacon cheeseburger stacked with four strips of bacon, three slices of cheese, and three 1/3 pounds of Angus beef patties on a premium bun with mayo.

“The Godzilla and Kong movies are part of an iconic franchise and we’re excited to bring the innovative flavors of Carl’s Jr. and Hardee’s to life in celebration of the Godzilla vs. Kong debut,” stated Mike Woida, president of CKE International. “The Godzilla and Kong products are inspired by this massive release with larger-than-life, mouthwatering flavors that are impossible to ignore. We’re looking forward to having our customers around the world enjoy these burgers alongside the film’s release.”

The menu dropped on the same day of the film, March 31st, and will be available for a limited time only at Carl’s Jr. and Hardee’s locations internationally, until supplies last. Be sure to grab a bite if you happen to be in any of the 20 different regions: Canada, Latin America, Asia, Australia, Europe, the Middle East, and Mexico (which gets a special black bun on their Kong Burger).

Elsewhere in burgers, Burger King Japan doubles down on unattractiveness with its “Teriyaki Ugly Beef Burger”.