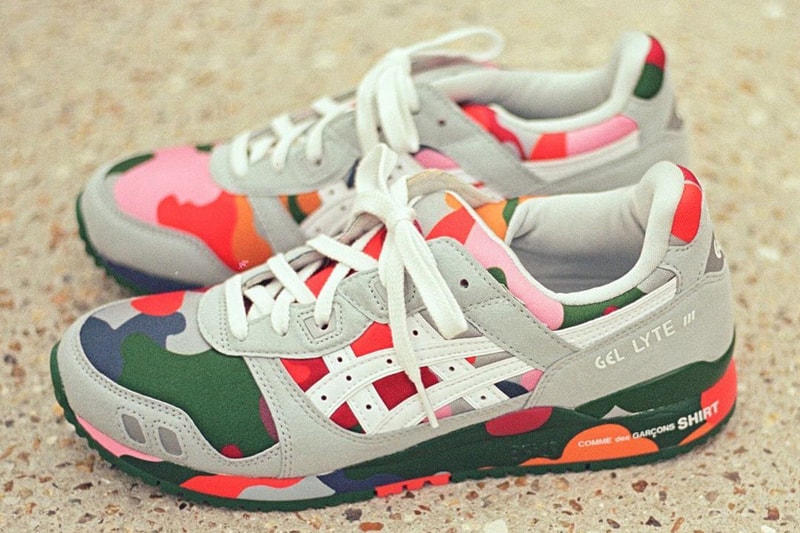 Fresh off of collaborations with Online Ceramics and Futura, COMME des GARÇONS SHIRT has teamed with ASICS to release a GEL-Lyte III covered in colorful camo print. One of ASICS’ most well-known heritage silhouettes, the GEL-Lyte III serves up a unique look with its split tongue and layered upper. This style of the seminal runner was first seen in January at CdG SHIRT’s FW20 runway during Paris Fashion Week. A camo print that wouldn’t conceal the wearer anywhere — except potentially at the circus — is swathed over the nylon uppers and EVA foam midsoles alike. Mixing everything from orange to pink, blue and rich forest green, it presents a wild, whimsical look. This free-flowing ethos is offset ever so slightly by the suede overlays and midfoot Tiger stripe: the former is dressed in traditional gray, the latter in elegant white. Further ASICS branding appears on and around the heel, while a COMME des GARÇONS SHIRT spellout hit is stamped on the midsole in white.

If you look at this GEL-Lyte III from the top down, you’ll notice an interesting tweak to the tongue as well. The slit design usually meets perfectly in the middle, leaving an ever-so-small crevice to keep the wearer’s foot cool. Here, however, the medial side overlaps the lateral side entirely, making for a striking asymmetrical detail that would likely be missed by anyone but ASICS purists. Green and orange outsoles complete the look.