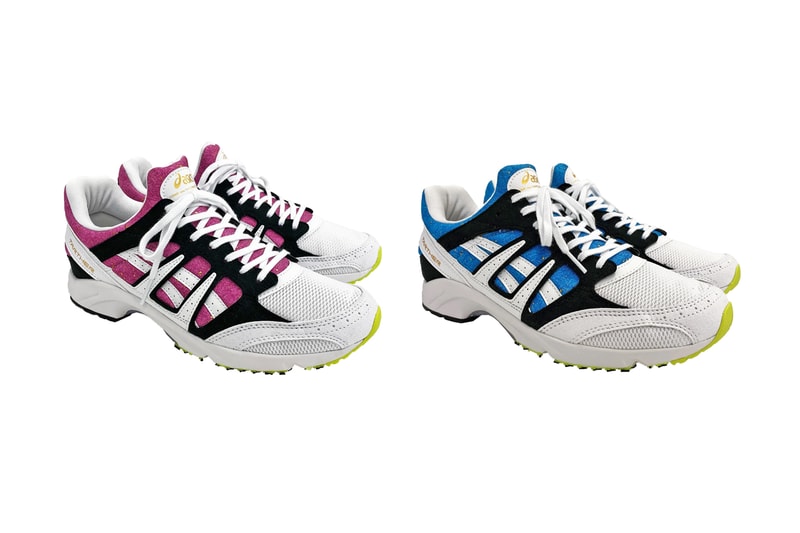 COMME des GARÇONS SHIRT and ASICS first revealed their TARTHER collaborations as part of the former party’s Spring/Summer 2021 lineup, and now both of the gold-flecked running sneakers have officially released. A popular silhouette in Japan, the TARTHER is essentially an upgraded version of ASICS’ Tiger Runner from 1983, and here CdG SHIRT has given it a little bit of high-end flair.

Slim in build but striking in shape, each TARTHER is centered around its richly-colored quarters and heels — which are done up in either purple or blue. Luxurious detailing arrives via metallic gold speckles across the colorful base. The rest of the shoe is an exercise in retro running style, using white mesh and leather plus black suede while also featuring cut-out detailing and a special Tiger stripe on the quarter.

Gold co-branded COMME des GARÇONS and ASICS hits grace each tongue, with a gold TARTHER spellout on the lateral heel. More co-branding is present on the insoles. Trim midsoles are constructed from white EVA foam, and both shoes are completed by a sporty outsole with a neon yellow forefoot and a silver-speckled midfoot bridge.

Both colorways of the COMME des GARÇONS SHIRT x ASICS Tarther are available now via the CdG webstore and retailers like Offspring. The MSRP for each is set at $290 USD.

Elsewhere in the world of ASICS, check out the intricate HS2-S GEL-MC.