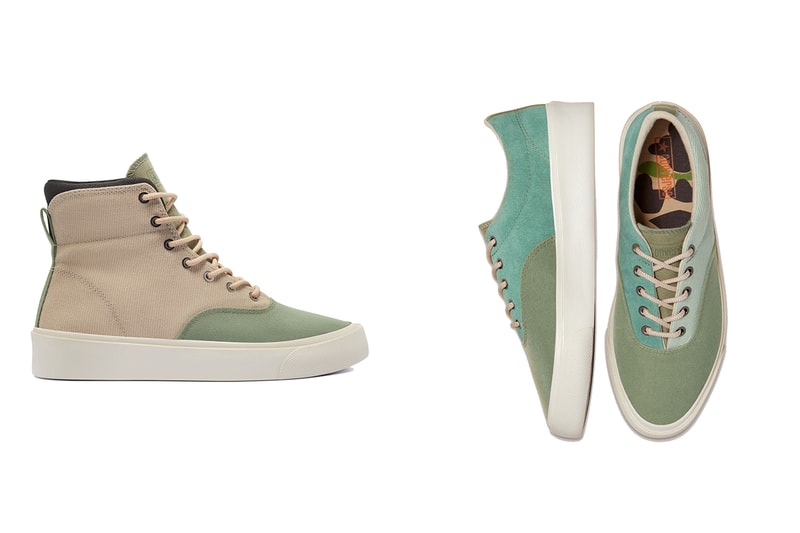 Converse’s Skidgrip was formerly called the Circular Vamp Oxford (CVO for short), and although it was released in 1910 it only really became something notable in the ’60s when its no-slip sole was favored by many. In the ’80s, BMX, surfing and skateboarding cultures adopted the sneaker making the shoe particular popular in South California.

Today, the shoe is most known for its collaborative efforts (take a look at this Stüssy pair, for example). However, the Skidgrip is soon to become an in-line sneaker for Converse, with its High releasing in “Safari/Biscotti/Oil Green” and the Low dropping in “Oil Green/Malachite Green.”

The High version is fitted with durable jungle cloth and waxed canvas for a military-inspired aesthetic that’s continued through its green, beige, cream and gray color palette. Rope laces threaded through metal eyelets add to the utilitarian theme, while corduroy padding on the heel-collar section softens up the pair a bit.

Converse uses the same mixture of materials for the Skidgrip Low, but focuses more on corduroy and suede as these fabrics adorn both sides of the shoe and its toe box. Similar rope laces can be found also threaded through metal eyelets, and a camo-printed insole has been added to further nod to the shoe’s military inspiration.