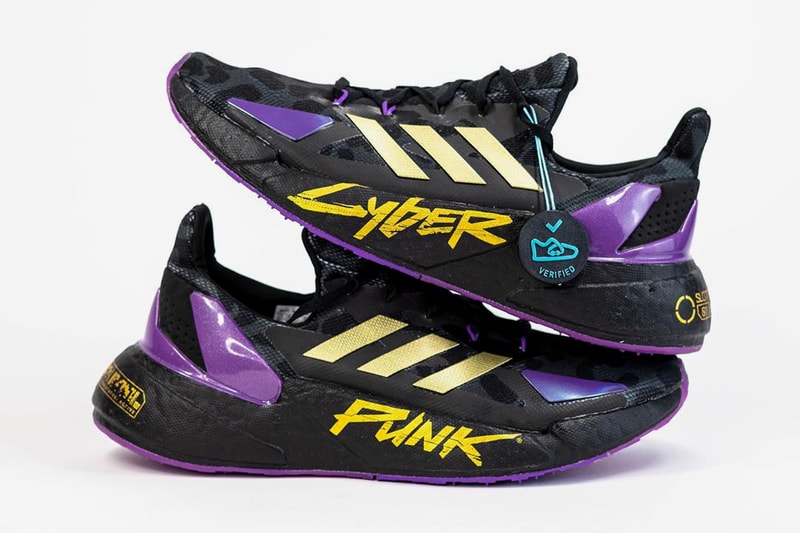 While the gaming world impatiently awaits the release of CD Projekt Red‘s long-delayed Cyberpunk 2077, the buzzy title has teamed with adidas for a fresh take on the X9000L4. A fitting collaborative silhouette for a future-focused game — the X9000L4 is inspired by the “hyperconnected” world and features a data-driven outsole pattern — this special shoe is a mixture of top-tier fan service and conceptual design.

Black uppers are coated in what appears to be an abstract, tonal camo print, and feature sharply-edged triangular graphics on the quarter. Gold Three Stripe graphics work with purple toebox and heel accents to lock in the game’s color palette, and tongues offer a shifting branded embellishment that slides between Cyberpunk 2077 and adidas graphics depending on the angle it’s viewed from.

Although there’s a lot going on with the upper, the thick BOOST midsoles serve up the shoe’s most notable detail: gold “Cyber” and “Punk” hits front and center, split between the left and right foot. Heels add further to the branded detailing with “Neural Connection Status: Active” graphics worthy of Cyberpunk 2077 star Keanu Reeves.

A release date or pricing info for the Cyberpunk 2077 x adidas X9000L4 has yet to be announced, but it’ll likely arrive this fall alongside the game itself.