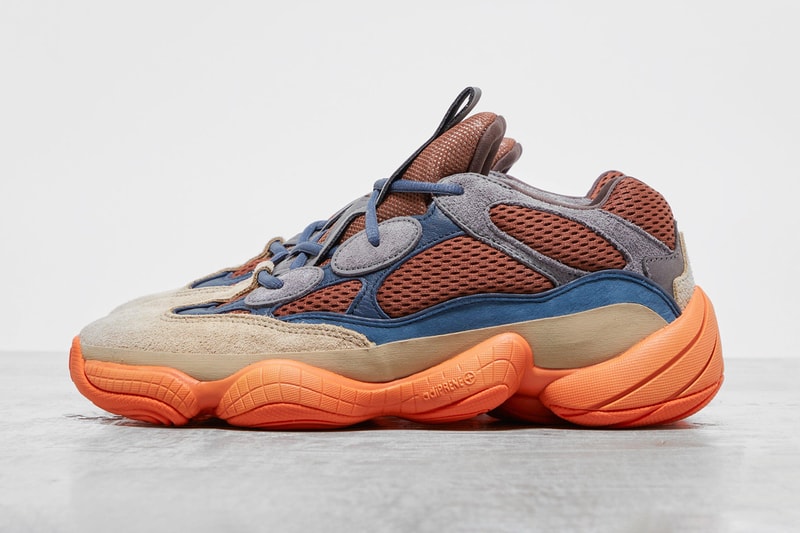 With summer around the corner, news from the world of Kanye West and adidas‘ adidas YEEZY partnership is ramping up. One of the most compelling models the YEEZY line is set to drop in the coming weeks? The YEEZY 500 “Enflame.” Quite possibly the loudest YEEZY 500 colorway yet, the “Enflame” mixes tones both hi-vis and earthy, seemingly leaning further into its basketball heritage than past 500 models.

Built from a colorful cachaphony of meshes, leathers and suedes, the “Enflame” offers up a heavily-layered look. Its base is constructed from a reddish-brown jersey mesh, and a more tightly-woven mesh is used on the tongue. The midfoot is overlaid by gray suede and navy blue leather. Tan suede appears on the toebox and heel, while down below a Crazy 8-esque orange adiPRENE midsole/outsole works with a durable synthetic tan mudguard to complete the look.

The adidas YEEZY 500 “Enflame” is supposedly releasing at some point in April, though this has yet to be officially confirmed by adidas. Its MSRP will be set at a standard $200 USD.

For more news from the YEEZY line, take a look at the YEEZY BOOST 700’s own “Enflame Amber” colorway and check out the all red YEEZY FOAM RNNR “Vermillion” as well.