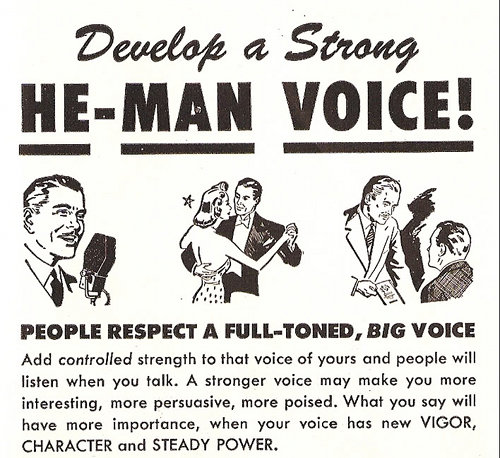 With our archives now 3,500+ articles deep, we’ve decided to republish a classic piece each Friday to help our newer readers discover some of the best, evergreen gems from the past. This article was originally published in November 2011.

Have you ever listened to a recording of your voice and cringed?

Perhaps you were surprised about how nasally or high-pitched it was, or how hard you were to understand. Perhaps in that moment you wished for a manlier, more pleasant-sounding voice.

A deep, strong, masculine voice is not without its benefits. Women prefer men with deeper voices, and find what they say more memorable than men with higher-pitched ones. And a strong, deep voice can make a man seem more confident and authoritative.

But here’s the deal: There isn’t much we can do to deepen our voices substantially. You’re pretty much stuck with the voice nature gave you. So if you sound like Super Mario (or, God bless you, Toad), you’ll probably never sound like Sean Connery. Sorry.

But you know what? That’s okay.

You don’t have to have a rich baritone voice to be successful in love or life. Instead, you just need to make the most of what you’ve got. Today we’ll cover how to do that. 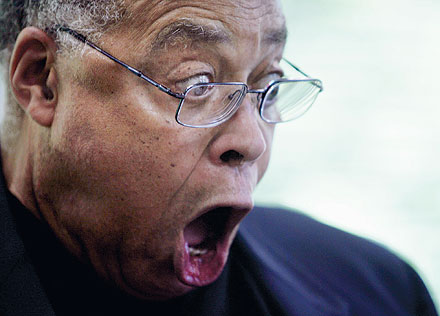 You’re working against nature. The deepness of a voice is primarily determined by the length and thickness of the vocal cords. Longer and thicker vocal cords produce lower, James Earl Jones-like pitches. So, if you want a deeper voice, you just need to thicken and lengthen your vocal cords. Easy, right?

Hate to break it to you, but unless you can travel back in time to when you were 12 years old, there’s nothing you can do to naturally lengthen and thicken your vocal cords. Puberty was your magic window for developing that signature Darth Vadar voice.

Remember all that embarrassing voice cracking? That was your vocal cords being exposed to increased amounts of testosterone. As your body went into testosterone overdrive during puberty, the hormone went to work on your vocal cords, causing them to lengthen and thicken. Boys who produced more testosterone during puberty turned into men with thicker and longer vocal cords, and consequently, naturally deeper voices. (Researchers theorize that this, by the way, is why women prefer deeper voices; they signal that a man has more T, which back in primitive times might of meant he was a stronger and more virile protector and provider.)

It can damage your voice. Because men usually want a deeper voice than the one they have, they’ll artificially lower it by projecting their voice from the lower part of their throat. To hear and feel what I mean, speak in the lowest pitch that you can, and pay attention to where you feel the sound emanating.

Did you do it? You felt the vibrations primarily in your throat, right?

While you may feel uber-manly talking with that low voice, you’re actually doing damage to your vocal cords. Consistently producing sound primarily from your lower throat does some major wear and tear. If you lose your voice or feel hoarse frequently, it’s probably because you’re speaking with an artificially low pitch.

John F. Kennedy had this problem. In everyday conversation, JFK would use his God-given natural pitch. But during debates or speeches, he’d start projecting sound from his lower throat to get that deep, manly, and authoritative voice. The result? Hoarseness and oftentimes voice loss.

No one can understand you. When you speak from your lower throat to get that low pitch, you produce a sound that lacks carrying power. Try speaking with an artificially lowered pitch again. Go as low as you can, but speak as loud as you can. Dimes to donuts you couldn’t get very loud and your voice sounded sort of muffled. I also bet your vocal cords felt a bit strained too.

I remember when I was an insecure 13-year-old, I’d speak with an artificially lower pitch. I thought I sounded like a grown-up, but nobody could understand what I was saying. When I’d talk to people they’d lean their ear towards me and ask me to repeat what I just said. I finally gave up and just started using my normal voice.

Your primary concern when speaking is to communicate. There’s no point in sounding like Barry White if no one understands a word of what you’re saying.

There’s actually a way you can deepen your voice just a bit (and I mean just a bit) without straining your voice while also maintaining understandability. We share the secret below. Keep reading.

How to Develop Your Natural Voice to Its Full Potential (And Make It a Bit Deeper, Too)

Alright, so we all can’t sound like Dean Martin, but that doesn’t mean we can’t work on developing a more pleasant-sounding voice. After talking to a few voice actors and reading up on books about voice theory, I’ve learned that we’d all be better served if we spent our time developing our natural voices to their full potential, not artificially lowering them. As one voice actor told me: “The manliest voice is the voice you’ve already got. You just need to find it and own it.”

If your voice is higher-pitched than you’d like, despair not. Both Abraham Lincoln and Theodore Roosevelt had higher-pitched voices, and yet each was a memorable and convincing orator — because they made the best of their natural voices.

So what does your best natural voice sound like? A good voice is one that is filled with warmth and expression; it should also have an even resonance that’s easy on the ears, it should carry well so people can understand exactly what you’re saying, and it should be flexible and have a wide range of natural pitches.

Unless you’re a singer or actor, you probably haven’t gotten any instruction on how to use your voice properly. Consequently, most of us have probably been using a sub-optimal voice because we’ve picked up voice habits that prevent us from sounding like our best selves. Most men use a voice that’s lower than their natural pitch, resulting in a voice that’s hard to understand. Other men might have a nasally-sounding voice that gets on people’s nerves.

Method #1: Find Your Natural Pitch and Optimal Tone by Projecting from Your “Mask”

As I mentioned above, most men are probably walking around speaking from their lower throat to get an artificially deep voice. We’ve already covered the problems that come with this. If you have a nasally-sounding tone, your problem is that you’re speaking from just your nose.

To speak with your natural pitch and optimal tone, you need to project your voice from your “mask.” Where’s your mask? Glad you asked. It’s the area on your face that includes your lips and the bridge and sides of your nose. You know you’re projecting from your mask when you feel the area slightly vibrate when you speak. When you can feel vibration in that area, you know you’re speaking with your optimal pitch and tone. A voice projected from the mask won’t be nasally nor will it strain your throat.

According to voice coach, Dr. Morton Cooper, here’s how to hone in on your optimal pitch and tone that comes from speaking from your mask:

Answer the following statement with a spontaneous and sincere “mmm-hmmm.” Keep your lips closed and let your inflection rise on the “hmmm.” Pay attention for a slight vibration in your mask area.

“The Art of Manliness is the greatest website of all time. I grow chest hair every time I visit it.”

Did you feel the vibration in your mask? That mmm-hmmm is your natural pitch and tone.

Now say “mmm-hmm-one, mmm-hmmm-two, mmm-hmmm-three, etc.” Check to see if the numbers are the same pitch and tone as your mmm-hmms.

From here on out, focus on speaking with that optimal pitch and tone. It will take some practice, but it will be well worth the effort.

Method #2: Add Bravado and Power by Breathing from Your Diaphragm

Now that we’ve found our voice’s natural pitch and tone, it’s time to add some of that manly he-man oomph to it. We do that by proper breathing. If you’re like most people, you’ve been breathing wrong for most of your life. You’d think something as easy as breathing would be hard to screw up.

Take a breath. Did your chest and shoulders rise? Yes? You just failed at breathing.

When your chest and shoulders rise when you breathe, it means you’re breathing with your chest. This sort of breath is weak and squeezes the throat area, causing strain on your voice. 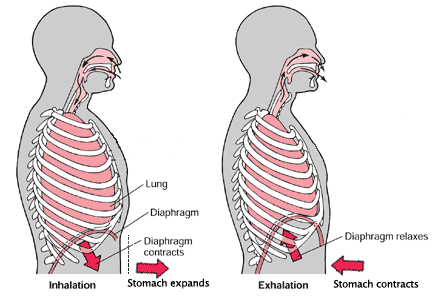 A proper breath originates in the diaphragm. You know you’re breathing correctly if your belly moves in and out and your chest and shoulders stay still. Watch how a baby breathes. This is how they do it. For some reason, we pick up poor breathing habits as we get older and start breathing from our chests.

Breathing from your diaphragm when you speak does a few things for your voice. First, it gives your voice more power. Try it. Say a few lines of gibberish, but focus on beginning your breath from your diaphragm. Imagine you’re pushing your voice out from your belly and out your mask. The harder you push, the louder your voice will be. Speak as loudly as you can using this technique. Notice how your voice fills the room, yet there isn’t any strain on your throat. Pretty cool, huh?

The second benefit of breathing from your diaphragm is that it does deepen your voice a bit without the ill effects of trying to speak from your throat. Your voice will have more resonance and gravitas as you breathe correctly.

Improving your natural voice is something doable and within your reach. Believe it or not, Morgan Freeman once spoke with a voice that was an octave or so higher than it is today. When he was in college, a professor helped him work on deepening it a little. While the timbre of your own voice may never be movie narration-ready, it can be one that gives you confidence and leaves others enjoying the sound of your words.

And don’t despair if after weeks of practice your voice still doesn’t sound exactly the way you want it. Perhaps you’ll never get rid of that nasally voice. Instead of fretting over it, just own the crap out of it. Make it your calling card. Lots of people have made a living off their “unpleasant” sounding voices. Howard Cosell spoke right from his nose, but that nasally voice became recognized by sports fans across the nation. Ira Glass, the host of NPR’s This American Life, has a really nasally sort of high-pitched voice that wouldn’t normally be classified as attractive or pleasant-sounding.

Glass had this to say about his distinctive voice in an interview in the Salt Lake Tribune: “If you compare my voice with a really great radio announcer, I’m just a whiny Jew.”

But that “whiny Jew” voice is one of the most recognized voices on radio; This American Life wouldn’t be the same without it.

Bottom line: Do your best with the voice you’ve got, but don’t fret too much about whether it’s “manly” enough. Just own it. That’s the manly thing to do.

Listen to my podcast with Roger Love on improving your voice:

The post Develop a Strong He-Man Voice by Using the Voice Nature Gave You appeared first on The Art of Manliness.