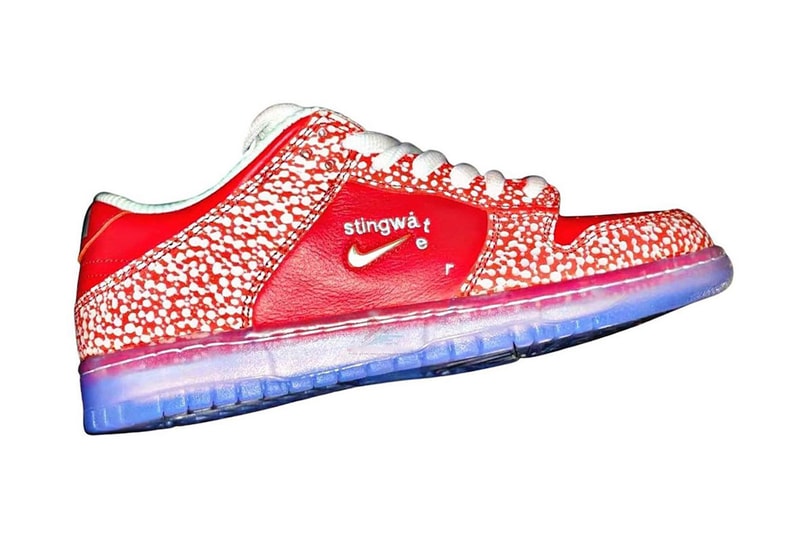 Nike and its skateboarding division continues to make its beloved Nike SB Dunk the cynosure of the sneaker market by further increasing its collaborative output. Following its team-ups with Supreme and Carpet Company, the Nike SB Dunk Low is now taking on a project with Stingwater — a streetwear imprint that is helmed by Daniel Kim.

If you simply sifted through the Stingwater brand’s IG, you’ll notice that the garments and accessories are often designed with playful graphics and patterns. That adventurous design language is certainly put on display here as Kim reimagines the iconic Nike SB Dunk Low a bold and bright palette. Most of the sneaker’s complexion is dialed to a striking red hue, while white accents are shown off through the white safari print that wraps the overlays, laces and the miniature Swooshes and signature dismantled “Stingwater” branding. Additional key elements of the upper include the corduroy sock liners which have been given angelic skins, as well as the translucent tongues which trade out the usual Nike SB tag for a cardboard brown banner that reads “stingwater SHOE VERY SPESIAL”. Insoles also feature co-branded hits and arrive with a clinical green backdrop.

Underneath all of that are icy midsoles that split between a “Planet Emoji” spell out on the right side and “With Eyes” on the left. No release info has been announced just yet, but expect them to likely drop via select Nike retailers in the coming months.

For other footwear news, official images of the Nike SB Dunk Low “ACG Caldera” have emerged.