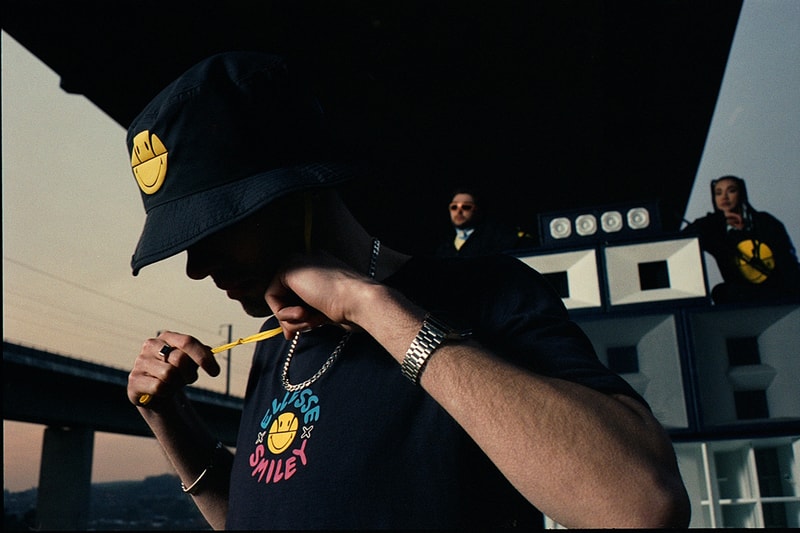 ellesse continues its partnership with Smiley to unveil its second collaborative collection channeling both brands’ heritage within the rave scene. Built on the nostalgic references of the subculture, they have tapped into London-based brand Wavey Garms to curate the latest “Reset the Rave” campaign.

Celebrating the locations, motifs and aesthetic of the rave scene — the campaign offers a sense of hope after a turbulent year. Motorway underpasses and wall-sized sound systems channel the outdoor raves of the ‘90s with emerging DJs, Scar Duggy, Tanya Sanadze, Bluetoof and Bailey Ibbs enlisted to front the shoot.

The collection maintains the nostalgic theme, merging ellesse’s signature sportswear designs with Smiley’s counter-culture background. Dual-logo branding sees the iconic Harvey Ball-inspired smiley face fused into ellesse’s semi-palla on a selection of T-shirts and swim shorts for the menswear offering as well as cycle shorts and a Clounint bodysuit for women. Unisex tracksuits and a Merrazzi windbreaker crafted for functional comfort with an array of bucket hats, baseball caps and sidebags built for the all-nighters round off the collection.

In addition to the garment offerings and campaign visuals, Wavey Garms has collaborated with Bluetoof and Simon Franks from the Audio Bullys for a track delving into rave history and looking ahead at its future, adding to the multi-sensory element of the collection. Speaking on the campaign, Wavey Garms founder Andrés Branco says they hope they will “Rally the next generation of ravers for when we can all dance together again.”