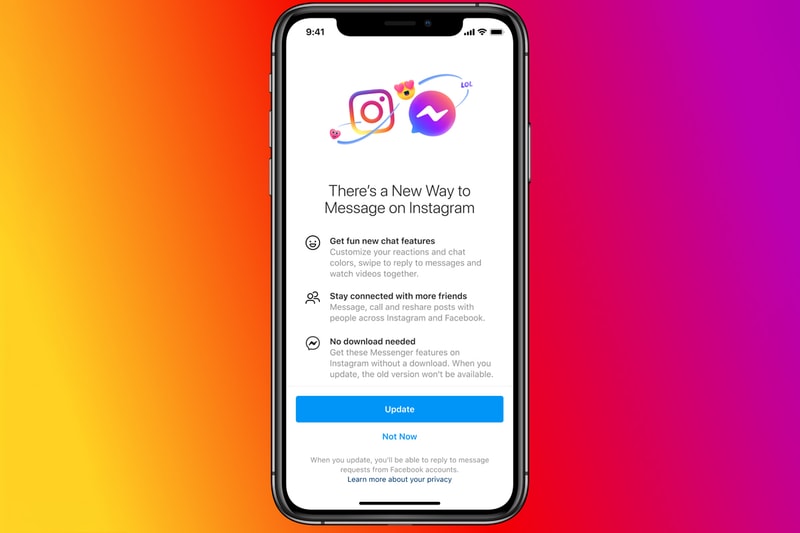 Facebook announced that it is integrating its Messenger chat with Instagram‘s direct messages in the company’s growing effort of unifying all messaging systems across its three messaging apps. Facebook users are now allowed to message Instagram users without the need for an app and vise versa, although the option has to be opted into first.

The integration initiative comes from Mark Zuckerberg‘s plan to private communication instead of utilizing open broadcasting by users in the Facebook News Feed. Zuckerberg hopes to one day integrate the messaging services across Facebook Messenger, Instagram, as well as WhatsApp in the near future. Although each app will remain standalone, many believe the integration move could spark antitrust concerns over its dominance in the space. Facebook bought Instagram for $1 billion USD in 2012, and it bought WhatsApp in a $16 billion USD deal in 2014.

Following Zuckerberg’s announcement of his ambition to integrate messaging chats across the three apps, Facebook co-founder Chris Hughes called on the company to be broken up. Hughes stated that Facebook has become a social media monopoly, with users unable to switch to any viable competitors.

Earlier this year, European Union lawmakers also expressed privacy concerns after Zuckerberg’s plan was announced. Back then, Zuckerberg argued that social media users have several chat options to choose from.