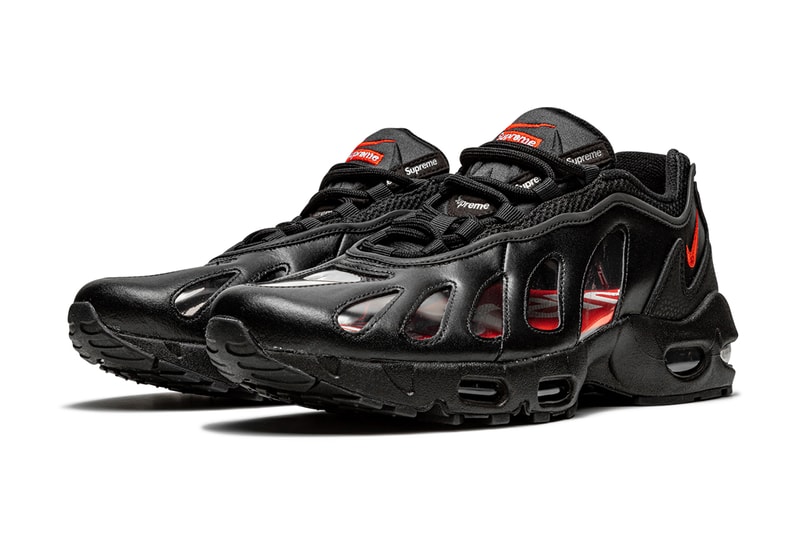 Earlier this year, Supreme and Nike joined forces on a highly-revered SB Dunk Low collection as well as an apparel capsule that involved puffer jackets and accessories. There’s more in store for the “World Famous” imprint and the Swoosh as the two parties are cooking up a Nike Air Max 96 collection and the range’s “Black” colorway has just surfaced.

The Nike Sportswear offering — which originally launched in 1996 — hasn’t seen a retro release since 2016, and the NYC-based imprint has modified its constructions with playful flair. The model — which traditionally features puffed out mesh paneling — has been altered with translucent windows, and this allows you to peek inside the kicks and see its bold red Supreme-branded footbeds. Surrounding these windows are stark black leathers that make up the side walls and the toe boxes, as well as tonal tumbled leather overlays on the heels, the latter of which is accessorized with a gray Supreme plate. Stealthy tongue areas are also marked by “Speed Red” box logos and Nike checks, in addition repeating Supreme branding just below. Swooshes that are situated towards the lateral and medial heels are also draped with red skins. The Air Max-loaded midsoles and the treading continue with the darker theme by arriving with the all-black aesthetic.

No release date for these has been confirmed by Nike or Supreme just yet, but expect them to likely launch within the coming months.

In case you missed it, the COMME des GARÇONS HOMME PLUS x Nike Air Carnivore Is now available at DSM Ginza.