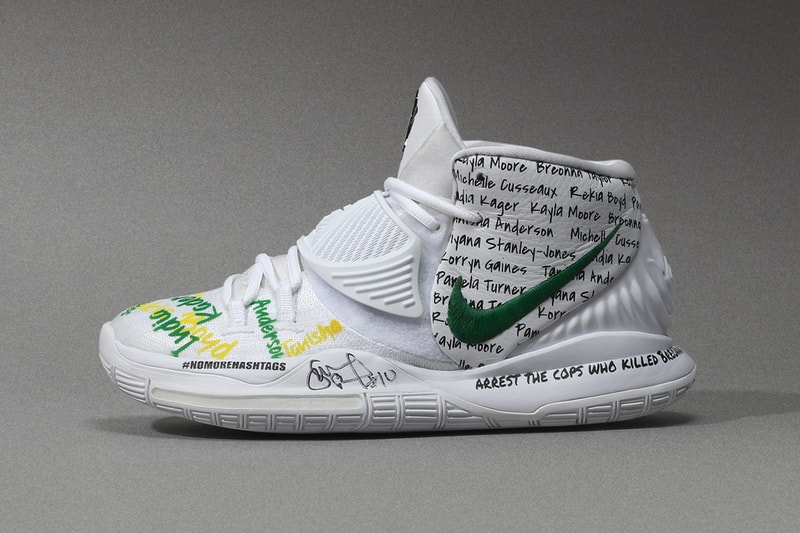 Flight Club has teamed up with Sue Bird of WNBA team Seattle Storm and Diana Taurasi of Phoenix Mercury to auction off their game-worn and signed sneakers to support the Breonna Taylor Foundation. It has been just over five months since the death of Breonna Taylor in Louisville, Kentucky and none of the officers who were involved in the killing have been arrested. The auction aims to combat police brutality against Black women, while continuing the conversation around the Black Lives Matter movement.

Each sneaker in the auction bears the names of Black women who have lost their lives due to police brutality. The names are hand-written throughout the upper, while phrases like “Arrest the cops who killed Breonna Taylor” and “#NoMoreHashtags” are found on the midsoles. The two WNBA athletes and UCONN alums will auction off the sneakers to raise funds and awareness of these issues. 100 percent of all proceeds will go towards the aforementioned organization.

The auction will run from now until August 21 at 11 a.m. EDT on Flight Club’s Instagram. All bids must take place in the comments section of the post. The winner will be sent both pairs of sneakers upon proof of donation to the Breonna Taylor Foundation.

In other news, adidas has officially unveiled the YEEZY BOOST 350 V2 “Israfil.”