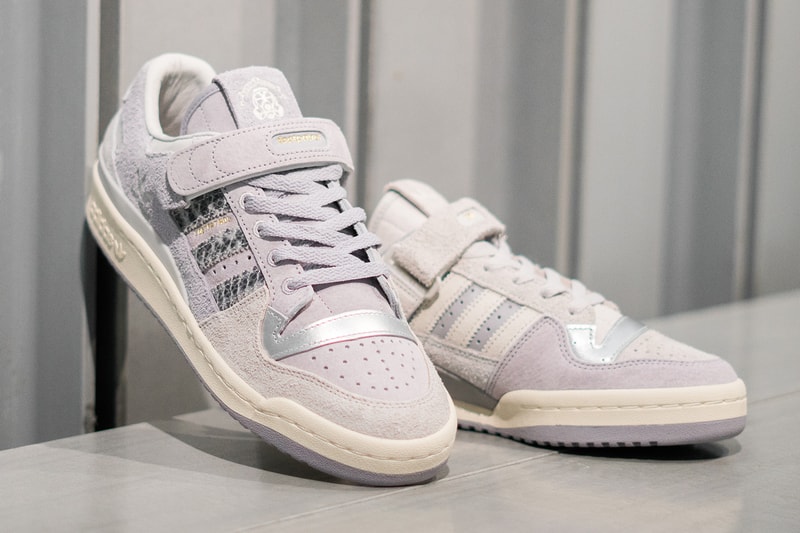 Footpatrol has teamed with adidas Originals for an elegant take on the Forum 84 Low. Most well-known for being the first basketball shoe to break the $100 USD price barrier when it debuted in 1984, the Forum was designed by Jacques Chassaing of adidas ZX fame — and combined then-modern tech with ultra-premium materials, making for an air of sport luxury that Footpatrol is replicating on its collaborative iteration. Looking inwards, Footpatrol tapped the refined-yet-utilitarian design of its London flagship store for color inspiration, dressing the leather and suede upper in a rich mixture of white and gray shades. Pops of flair are provided by metallic silver overlays above the toebox, black and tan snakeskin on the Three Stripe graphic and Footpatrol gasmask hits on the right tongue tag and left lateral quarter. Ankle straps get in on the fun too, with gold “Footpatrol” and “Family” spellouts, while sail midsoles and gray outsoles supply further contrast.

The style is limited to a scant 300 pairs, each of which is individually numbered with a gold foil stamp under the lateral collar. Each also comes with a second set of insoles, covered in printed signatures from the Footpatrol staff. A charitable aspect is at play as well: 100% of the proceeds from the shoes will be donated to The House of Saint Barnabas, a “social enterprise that works to support people affected by homelessness back into long-term employment.”

All 300 pairs will be available via an exclusive raffle on the Footpatrol webstore. The MSRP has yet to be announced.

Elsewhere in the world of adidas, get a first look at the space-ready UltraBOOST 20 “NASA.”