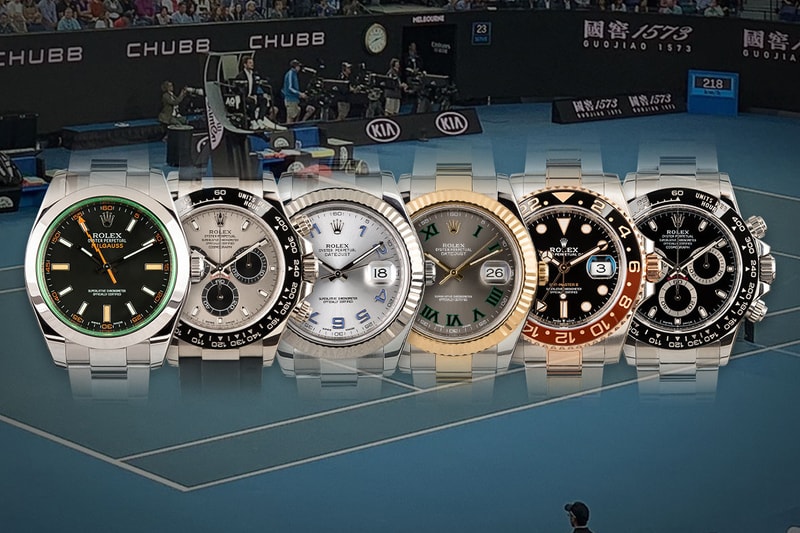 With the conclusion of the Australian Open, seeing Novak Djokovic and Naomi Osaka respectively win the Norman Brookes Challenge Cup and Daphne Akhurst Memorial Cup, we take a look at some of the Rolex watches that have made their way on to some of the more celebrated players on the court.

The sport of tennis brings in a number of luxury labels as sponsors, even seeing the likes of Rafael Nadal playing in a $1 million USD Richard Mille RM 27-04 Tourbillon watch, but there’s one watch brand that’s ubiquitous with the sport of tennis — Rolex.

Involved in tennis for over 40 years, Rolex solidified its name in the sport by becoming an official timekeeper for all four Grand Slam tournaments, and in 2017 signed a deal for the Australian Open that will last until the year 2027. On top of a partnership deal that allows for a high level of branding placement, Rolex also has a roster of pedigree players that represent the watch brand. Below is a look at just some of the Rolex watches and the tennis players who wear them. Rolex has a history with Roger Federer that dates back to 2006 when they signed what was one of the biggest deals in the sport. The deal was for a 10-year endorsement for a figure of $15 million USD. The deal was then renewed in 2017 for an additional $8 million USD with no disclosed end date — he could even be a lifelong ambassador. While Federer has a plethora of Rolex watches, he is often seen wearing a 41mm Rolex Datejust II ref. 116334 fitted with a distinct rhodium-colored dial featuring blue Arabic numerals. He’s also a big fan of the Sky-Dweller. This world top-five player was scooped up by Rolex in 2017 when he just hit the top-10 list. He has also appeared in Rolex’s ad campaigns and seems to favor the sports models. He often sports the stainless steel and ceramic Daytona chronograph. Thiem has also been seen wearing a stainless steel Submariner, also with a black dial and black ceramic bezel. Currently ranked No.14, the Spanish-Venezuelan tennis player had one of her best years in 2016 where she won the Grand Slam singles titles at Roland-Garros and The Championships, Wimbledon, the following year. It took her 16 years to finally rise to the No.1 position that year, and when she first entered the top 20 zone, she rewarded herself with a Rolex Datejust 36. She was quoted saying, “When I look at this watch today, I see joy. I see me working hard for what I wanted, I see me being an independent woman. I see myself giving everything I have to catch my dreams.” Considered France’s No.1 tennis player, Jo-Wilfried Tsonga turned professional in 2004 and has won such tournaments as the Paris Masters in 2008, the Canadian Cup in 2014, and then brought the Davis Cup to France in 2017. Tsonga switches things up from the pack by wearing a Rolex Milgauss ref. 116400GV on top of his green dial yellow-gold Datejust and white gold Datejust II. This top-10 player made history by becoming the highest-ranked Greek player on record and was signed by Rolex in 2018. His more recent accomplishments include reaching the semi-finals at Roland-Garros in 2020 and winning the Nitto ATP Finals in London in 2019. He’s been spotted most recently wearing the Rolex Daytona with a white dial and black ceramic bezel. Prior to his knee injury, the Argentinian Del Potro was ranked No.3 in the world and has over 20 ATP singles titles to his name. Nicknamed the Gentle Giant, the big man with the big heart is looking to return to the ATP Tour sometime in the second quarter of 2021. He’s been seen rotating between a few variants of the Datejust II. At 33 years of age, Kerber has been dedicated to sport for a very long time. In 2016, her grind paid off as her 13 years of competing led her to both the Australian Open and US Open singles titles, and the World No.1 ranking. Her first Rolex was one she bought with her prize money when climbing the ranks, long before her induction into Rolex’s family of Testimonees. Which watch did she buy? It was the Rolex Datejust 36 Ref. 116234. One of the newer ambassadors to Rolex, the partnership between the Swiss watch brand and the Russian tennis star began in 2019. Khachanov started playing tennis when he was just three-year-old and won his first ATP title at the Chengdu Open in China in 2016 at the age of 20. While he is currently going through some bumps in the road with his game, Khachanov has already proven he can break into the top 10 rankings. It is rumored that Khachanov’s favorite Rolex is the stainless steel and Everrose gold GMT-Master II Ref 126711CHNR.

For more watch info, here’s a history of watches worn by America’s presidents.