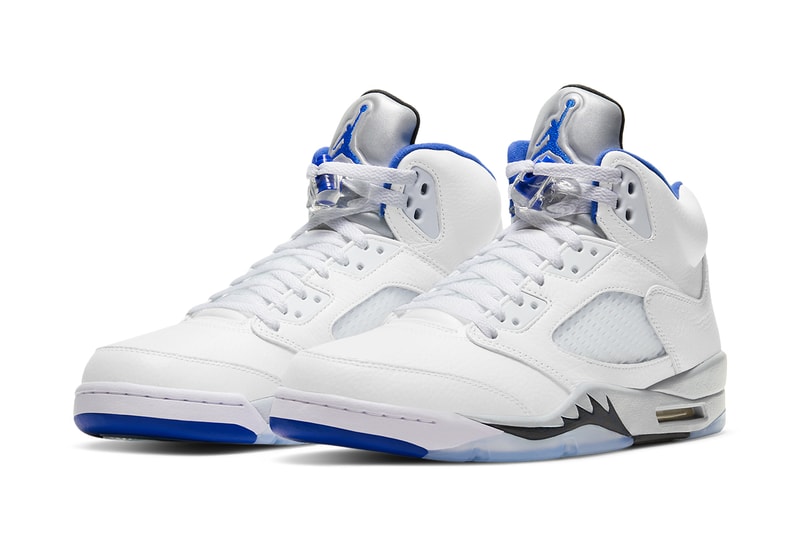 In the early months of 2021, the Air Jordan 5 has taken campus tours around the Jumpman-sponsored colleges to unveil special makeups for the football programs of the UNC Tar Heels, Florida Gators, Oklahoma Sooners and the Marquette Golden Eagles. However, it’s ready to get back to its regularly scheduled programming and unveil its forthcoming Spring calendar launches, one of which is the Air Jordan 5 “Stealth 2.0”.

This specific colorway is essentially a revival of the AJ 5 “Stealth” that released to the public back in 2006, but it has been modernized with a few minor tweaks that allow it to stand on its own. The high-profile upper is primarily assembled with white leathers and milky mid-foot nettings, but sees through to tumbled textures which is a deviation from the variant from 15 years ago that opted for smoother surfaces. Heightened areas such as the tongues bring back the same reflective “Stealth” and “Hyper Blue” color schemes between the tongues and the interior liners, as well as the translucent lace toggles that sit adjacent.

Midsoles are mostly crafted in a dark gray, and come contrasted with stark black sprayed over its signature spiky molds — another difference from its predecessor which filled in this area with blue. To conclude its look, the silhouette’s treading is built with an icy exterior.

Parties who fancy these kicks can find them releasing on March 27, 2021 for $190 USD via Nike and select retailers.

For more on the latest from Jordan Brand, official photos of the Air Jordan 1 Low OG “Neutral Grey” have popped up.