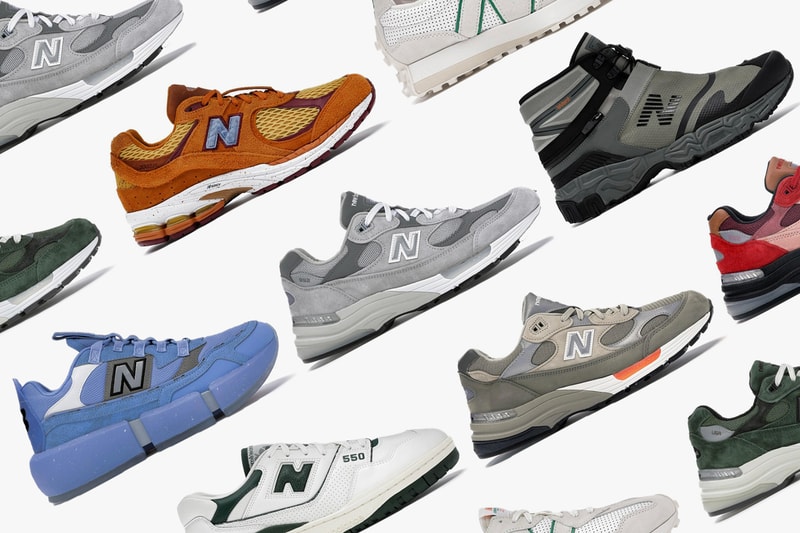 New Balance dominated 2020. That’s the simplest way to put it. That’s this whole feature-length piece wrapped up in four words. In a rollercoaster ride of a year dictated by a global pandemic and filled with uncertainty, the Boston-based brand somehow managed to put out twelve months worth of consistently good — and often great — sneakers.

There was the return to mainstream prominence of the 992 and the 1300. The revival of more obscure models like the 827 and 550. Brand new silhouettes like the 327, the Tokyo Design Studio’s RC_1300 and Jaden Smith’s Vision Racer. And that’s not even mentioning the brand’s roster of other collaborative partners, a dynamic assemblage that ranges from Salehe Bembury to WTAPS, from Casablanca to Aimé Leon Dore.

Just how did New Balance do it? How did they walk the fine line between the inclusivity of general releases and the exclusivity of limited collaborations, all while satisfying a growing lifestyle fanbase? It can be broken down into three strands: tasteful bringbacks, new silhouettes rooted in heritage, and compelling collaborative partners. Each was equally important, and all three combined to make for a truly memorable year, one that the brand hopes will serve as the beginning of a new era — like the inaugural championship from the Chicago Bulls’ first three-peat.

“People look to things they can trust in times of instability. The 990 franchise is the oldest continuous sneaker franchise in performance running. It’s been going since 1982, and people know what they’re going to get out of it from a quality standpoint, a looks standpoint.”

Though New Balance may be known for high-end running innovation in the performance world, in the lifestyle sphere and sneakerhead community it’s long been associated with archival silhouettes. From the 990 line to models like the aforementioned 1300, the seminal 574 and — of course — signature gray color schemes, several New Balance products offer a reassuring dose of familiarity.

Even Apple co-founder Steve Jobs thought so: his well-known uniform of a black turtleneck and blue jeans was often rounded off with a pair of 991s, or in later days the 992. In fact, Jobs loved the 990 line so much that rumor has it he may have helped design the 992. In a piece of popular lore — albeit one that’s never been confirmed by the brand — Jobs sent NB chairman Jim Davis a personal letter and sketch of what he desired from a shoe, legendary correspondence that helped advance the line itself. Though the assist from Jobs may just be the stuff of legend, the love for the 992 was very real in 2020. How did a 14-year old shoe have such an impactful year? Yearning, that and the aforementioned familiarity. “People had been crying out for a proper 992 re-release for a while,” says Brad Lacey, senior global design director at New Balance. “There was definitely a bit of pent-up desire around the shoe. Also, people look to things they can trust in times of instability. The 990 franchise is the oldest continuous sneaker franchise in performance running. It’s been going since 1982, and people know what they’re going to get out of it from a quality standpoint, a looks standpoint.”

Though the 990 line may boast several classics and a near 40-year history, some more under-the-radar silhouettes from the Boston-based brand’s archives caused considerable buzz as well. Two of these were the 827, an artfully-layered runner that was first introduced in 1997 and the 550, an ultra-niche basketball shoe from way back in 1989. A tried-and-true method to build hype was used around each of these drops: start with a covetable collaboration, then, after it sells out, follow up with in-line iterations a few weeks or months down the road. Both Stray Rats and Aimé Leon Dore took a crack at the 827, and ALD made the 550 one of the year’s most unexpected hits: a retro hoop shoe that was gobbled up by consumers and swooned over by influential Instagram archive pages.

Lacey was transparent when discussing this process: “[New Balance] is sensitive when it comes to our rollouts,” he said. “You want to make sure that the general release customers are getting enough flavor, but at the same time you want to respect the people who were able to score the limited collaboration and not make something that looks just like it. We respect both sides of that balance.”

“We struck a nerve with the [327], and knew we had a hit when all the samples at our headquarters went missing”

Let’s face it: bringing a new silhouette to market is a challenge in the modern-day sneaker climate. Just like Lacy mentioned, consumers often want what they’re comfortable with. They may not turn their nose up at new styles, but steering individuals away from a tried-and-true sneaker — like many of the ones listed above — while retaining their brand loyalty is an art in and of itself. This is one of the reasons the New Balance 327 was so impressive.

A brand-new lifestyle silhouette with a healthy dose of retro flair, the 327 was equal parts past and present, giving off a look that wasn’t dated — but also wasn’t loaded with in-your-face modern day technology. “We really went back to place ourselves in the mindset of a designer in the ‘70s, but give ourselves the tools of today” says Lacy. “The look is inherently familiar, so people feel confident wearing it, and they get the enhanced fit and comfort of current-day material construction as well. We struck a nerve with that shoe, and knew we had a hit when all the samples at our headquarters went missing.” It’s not just the brand — and its voracious consumers — that had a healthy appreciation for the 327’s past-meets-present design language: its collaborators did too. Though not a heritage silhouette, like the 827 or 550, the 327’s arrival was heralded in the same way: with a desirable collaboration. In this case, the brand partnered with the rising French label Casablanca. Charaf Tajer, Casablanca’s creative director, echoed Lacey’s statements in an April interview with HYPEBEAST, quipping “It’s the ultimate grandpa shoe — not a dad shoe but a grandpa shoe. I want to create a new classic and I think this shoe really encapsulated my idea of a new classic sneaker.”

The 327 artfully walked the line between maintaining a legacy and entering the future. On the other end of the spectrum, however, Jaden Smith’s Vision Racer charged gleefully into uncharted territory. With a sustainable, fully vegan construction, the Vision Racer was a step in an entirely new direction for New Balance: it drew from the 1700 and X-Racer, Smith’s personal favorite NB silhouettes, but was wildly unlike anything the brand had put out before. It also came from a creative partner that many would think sits far outside the standard NB lexicon.

“Our approach to [creative partners] really changed about two years ago, and you’re just seeing the results of that now,” said Lacy “We used to wait for people to approach us, and would then say ‘okay, does this feel like a good fit’. Now, we say ‘let’s go talk to people and find the best way to participate actively’.”

It’s safe to say that something as left-field as a collaboration with the polymathic Smith was entirely born out of this new ethos.

“Sometimes it’s a design-led conversation, and other times its a commercial decision with us expanding on a space we’re already in. However, no matter what we do we want to remind consumers just who we — and the brand we’re collaborating with — are.”

The final piece of the potent puzzle that was New Balance’s 2020 lifestyle releases? A cornucopia of compelling collaborations. An open-minded ethos was present in the vast majority of what the brand did over the course of the year — which is why collaborations have been discussed so heavily over the course of this article — and was the connecting thread in releases as divergent as the 992 and Smith’s signature sneakers.

Good footwear collaborations don’t always start with a lightbulb moment, an earth-shaking design or a clever colorway. They tend to spring from open, honest conversations between a sneaker brand and a collaborative party. “Maybe we’re sitting with someone like Teddy Santis, going through the archives and riffing on what one another likes,” said Lacy. “Sometimes it’s a design-led conversation, and other times it’s a commercial decision with us expanding on a space we’re already in. However, no matter what we do we want to remind consumers just who we — and the brand we’re collaborating with — are.” Salehe Bembury echoes this statement. Though he’s already a highly regarded designer who currently works as the Vice President of Sneakers and Men’s Footwear at Versace, and in years past crafted memorable boots for Kanye West’s adidas YEEZY line, he put forth his first ever collaboration in 2020: a New Balance 2002R. Yet another bring-back from the NB archives, the 2002R is a high-performance running sneaker that was given a lifestyle push for the first time ever in 2020, and Bembury’s Antelope Canyon-inspired design lead the charge before being followed up by collaborations from the likes of FDMTL and INVINCIBLE x N.HOOLYWOOD, plus clean general release drops as well.

“This project was an opportunity to create with no restraints,” Bembury told HYPEBEAST in a September interview. “In some cases, a larger operation may have too many opinions that can influence a product negatively. This collaboration allowed me to dissolve any distracting noise and create exactly what I envisioned.” This freedom afforded to partners, trusting of the collaborative process and healthy mutual respect provided a bountiful harvest for New Balance and its co-conspirators alike. Outside of Bembury’s 2002R, Santis’ ALD collaborations and the other entities listed above, NB’s open way of thinking also helped cultivate relationships with partners wide-ranging as Chicago designer Joe FreshGoods and esteemed Japanese brands WTAPS and Snow Peak. “We focus on community, and participating [in sneaker culture] in a really respectful way,” states Lacey. “No matter if it’s Joe in Chicago, Teddy in New York, an athlete, an artist, we share those values with our partners.”

Thanks in large part to the work of Lacey and Senior Manager of Global Collaborations and Energy Joe Grondin — a man who Bembury said “displayed a valuable quality that I’ve only seen in Kanye: the ability to build a team as if he was the conductor of a symphony” — New Balance can now look back upon a successful year. However, the soon-to-be 115-year old brand has no plans of slowing down.

“You’re going to see things that surprise you, things that make you think twice in 2021 and beyond,” said Lacey. ‘We’re going to stretch and grow the brand in really interesting ways in the years to come.”