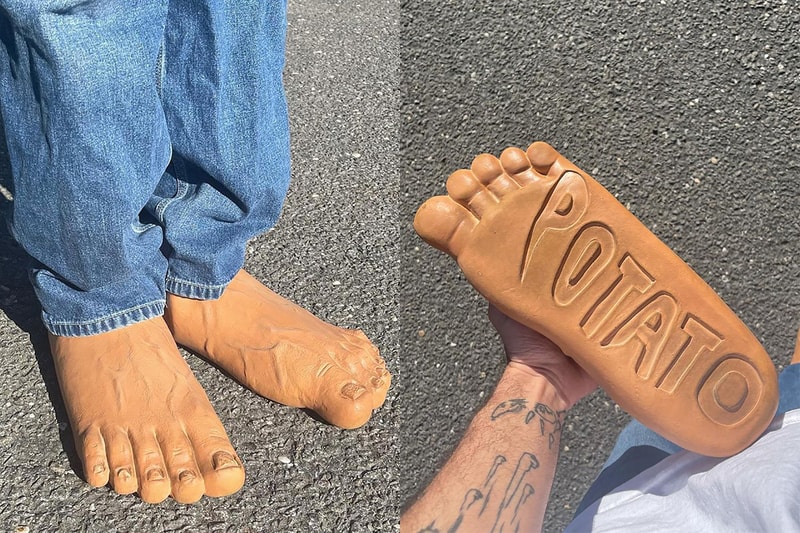 As a young designer, Imran Potato swiftly garnered a loyal fan base for bootlegging various apparel and accessory items from Gucci-patterned socks and backpacks to swimming trunks emblazoned with Louis Vuitton‘s signature monogram graphics to fugzai FOAM RNNRS. And next up for the creative is a whole new footwear project that is rather frightening but unsurprising: slip-on shoes that look like real human feet.

Teased via his Instagram, the footwear item looks as if though it was made for your Halloween costume and immediately elicits memories of when actor Jim Carrey pulled up to an Oscars Awards party back in 2013 rocking oversized feet kicks. It’s still unclear to say what the shoes are crafted from, but they do appear to be fully engineered with a vinyl or rubber material. From top to bottom, these wild shoes are drenched in a medium brown hue and feature intricate vein and toenail details that are so on point they might just make you cringe a little. Underneath, the word “POTATO” is carved out into outsoles and arrives in tonal fashion.

So far, no release date has been announced, but it’s likely that Imran Potato will drop these in the coming months.

For other news related to unorthodox footwear, check out Midorikawa and Suicoke’s Vibram FiveFingers collaboration with painted toenails.