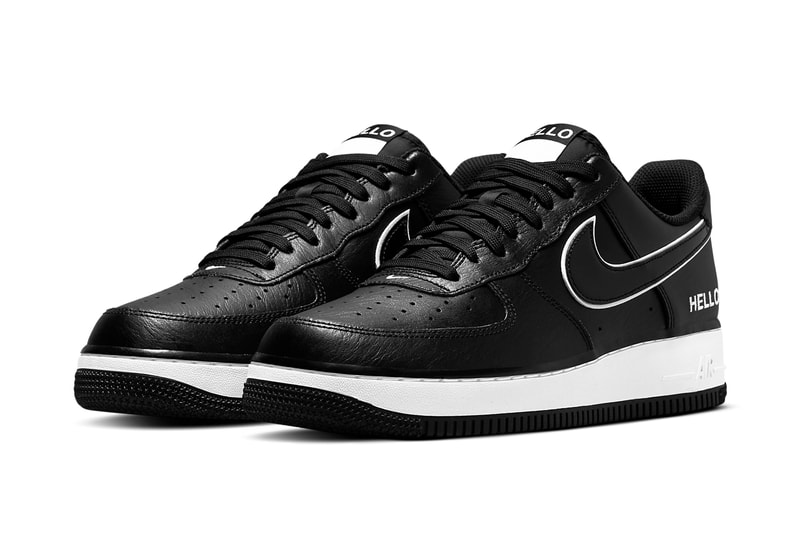 There’s nary a better way to make a good first impression than with a fresh pair of sneakers, and Nike is enabling you to introduce yourself in style with the Air Force 1 “Hello, My Name Is.” A two-tone sneaker with nametag-inspired graphics and a nom de guerre that’s surely Slim Shady-approved, the “Hello, My Name Is” may be Nike Sportswear‘s most quirky Air Force 1 Low since the USPS Priority Mail-inspired Air Force 1 Experimental.

Uppers are made of supple black leather, split by a high-gloss black Swoosh with white trim. “Hello” is embroidered in white on the heel, and also appears in white on the tongue tag, where it sits above a blank white square for the shoe’s most direct nod to its nickname. A final “Hello” appears on the insoles, and heels take on a white Nike Air badge. Down below, the look is finalized by a white midsole with jet black foxing and a black outsole.

The Nike Air Force 1 “Hello, My Name Is” will release via the Nike webstore and at retailers like Urbanstar Roma on June 3. Its MSRP is set at a standard $110 USD.

Elsewhere in the world of the Swoosh, Kanye West‘s famed Nike Air Yeezy 1 “Grammy” prototype recently sold at auction for $1.8 million USD, officially making it the world’s most expensive sneaker.