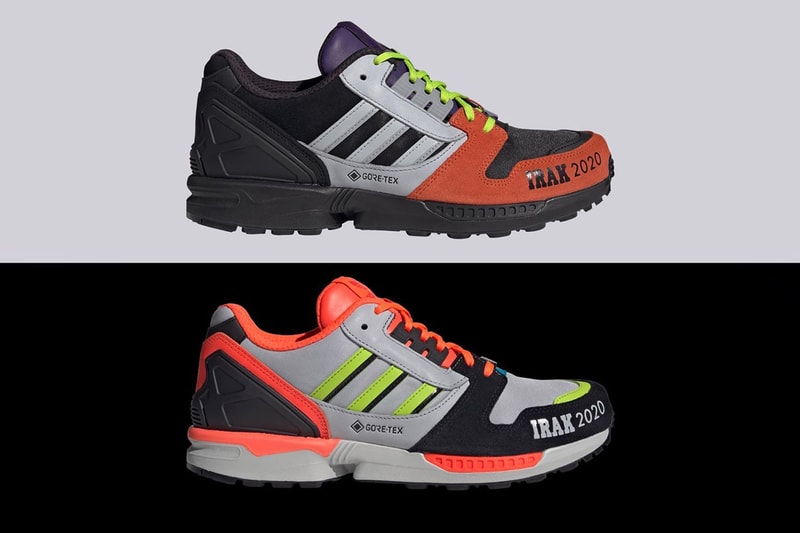 After traveling to the California deserts and Italian football pitches, adidas Originals‘ A-ZX line is heading to New York City’s streets by collaborating with IRAK on the ZX 8000. The legendary graffiti crew helmed by Kunle “EARSNOT” Martins and Jesse “NEMEL” Geller teamed up with adidas in 2007 for a memorable EQT Support Runner that’s widely heralded as one of the best Trefoil collaborations from the aughts, so they’re revisiting its color scheme — and the palette of a follow-up pair from 2008 — on this duo of new GORE-TEX equipped makeups.

Of note on IRAK’s inagural adidas collaborations were large text hits on the toebox that nodded to the year of production. Here, both fresh styles have been amended to read “2020,” but apart from that largely follow in the footsteps of their storied predecessors.

One style uses a black base with metallic silver accents, a red toebox, volt laces and a purple tongue. The other keeps both base and midfoot uniform with silver hues, equips volt on the Three Stripe midfoot graphic and toebox, adds bright crimson to the tongue, laces and rear trim and finishes with a dash of blue towards the forefoot. The differences continue in the branding and midsole as well, with the former taking on black tones in both spots while the latter uses grey and red. Each is rounded off by a black heel cage and a black GORE-TEX hit on the midfoot.

The IRAK x adidas ZX 8000 GTX collection is set to release on the IRAK webstore August 28, and will then see a global drop on September 4. Retail prices have yet to be announced.

IRAK’s ZXs aren’t the only revived classic adidas has on the way: the beloved UltraBOOST 1.0 is slated to return in “Core Black.”