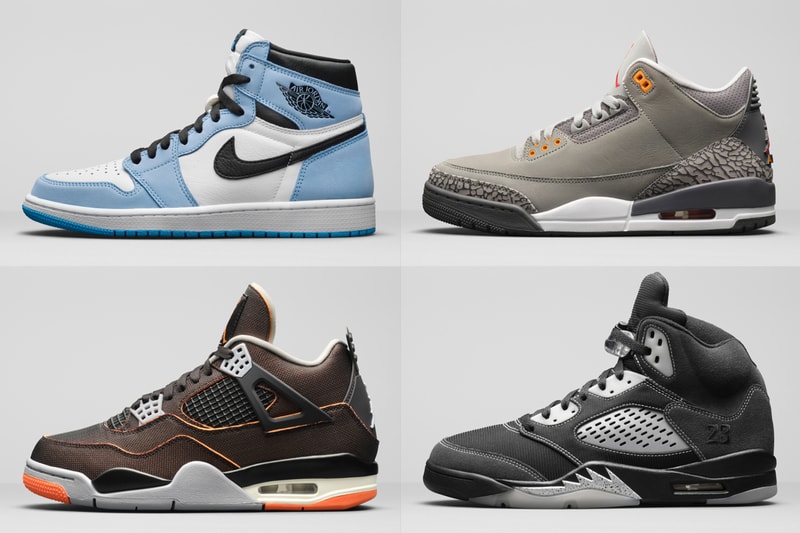 Jordan Brand has officially revealed its Spring 2021 retro collection. Building upon the ethos of its Holiday 2020 retro collection by blending bringbacks of classic colorways with new takes on beloved silhouttes, the 11-shoe slate offers up fresh Air Jordan 1s, familiar Air Jordan 3s and Air Jordan 5s plus much more. Unquestionably the Jumpman’s most ubiquitous silhouette of the last several years, the Air Jordan 1 appears in a trio of makeups. First is the “University Blue,” which provides a nod to Michael Jordan‘s collegiate days with the UNC Tar Heels thanks to its masterful use of light blue accents — all laid out in an Air Jordan 1 “Chicago”-esque color scheme. Next up is a silver-equipped style, drawing from the metallic nature of the popular Air Jordan 1 “Gold Toe,” but swapping out patent leather for a shimmering, crinkled silver material. It’s a women’s makeup but will be available in an extended size run. Finally, a crisp “Sail” pair with black trim, “Volt/University Gold accents” and a new tongue tag offers an energetic interpretation of the AJ1’s classic ethos. Next up is a selection of Air Jordan 3s, Air Jordan 4s and Air Jordan 5s. The Air Jordan 3 “Cool Grey” returns for the first time since its 2007 debut, and retains its original mixture of a crisp base with colorful orange and red accents. One Air Jordan 4 mixes carolina blue and cement print for a retail version of a famous UNC Tar Heels PE, while the other is a women’s-exclusive black and orange pair, boasting an alternate construction with textured synthetics and foam that’s inspired by the material construction of space suits. A black and silver pair provides a striking, alternate nod to the OG Air Jordan 5 “Black Metallic” by moving its reflective material from the tongue to the midfoot’s mesh netting and lower throat while also equipping a mix of suede, leather, and textiles. There’s also a white, gray and blue iteration that’s an updated version of the classic Air Jordan 5 “Stealth” from 2006. Rounding out the offerings are two Air Jordan 9s and one Air Jordan 13. The first AJ9 offers a subtle look by mixing black and charcoal tones with touches of “University Gold,” all atop a genuine nubuck upper. The other, a women’s exclusive, taps an Easter-like color palette and is all about the global impact and influence of Michael Jordan — placing words in multiple languages on its outsole and adding “Change the World” to the heel tab. It’s also environmentally conscious, thanks to its use of natural plant-based dyes. Finally, the Air Jordan 13 supplies premium athletic quality with a quilted leather upper and “Starfish Orange” accents popularized by 2015’s Air Jordan 1 “Shattered Backboard.”

Jordan Brand’s Spring 2021 retro collection will begin rolling out on Nike SNKRS and at retailers like Foot Locker come January 2021. Specific release dates have yet to be announced.