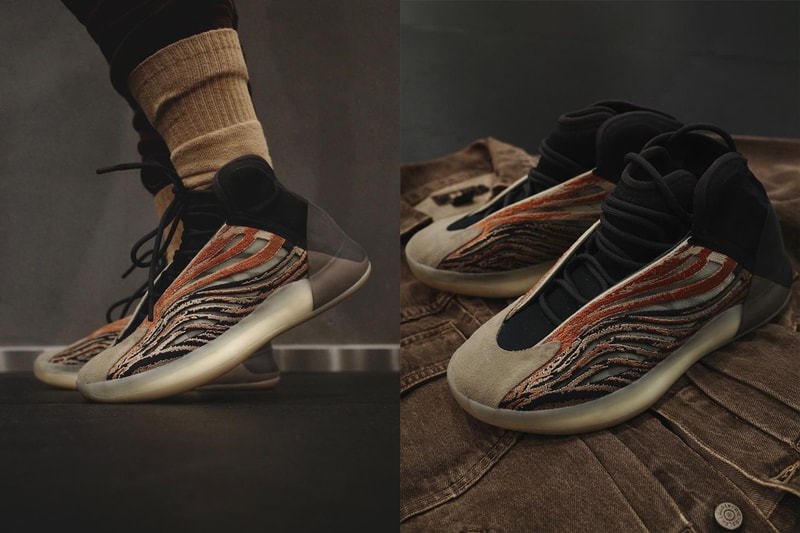 Kanye West and adidas‘ popular-yet-scarce YEEZY QNTM has appeared in a new “Flaora” colorway. Following up the “Frozen Blue” and “Teal Blue” styles that released towards the tail end of 2020, the “Flaora” boasts a look centered around a rusty bronze tone.

This bronze shade appears on the upper’s wavy overlays, where it’s more prominent towards the throat and interspersed with a healthy dose of black towards the midsole. These overlays sit atop a semi-translucent mesh base, and are surrounded by a YEEZY BOOST 700 V2-style gray suede toebox and a black collar. The entire assemblage is bolstered by a smoky black heel clip, which itself descends into the midsole and meets a semi-translucent gray forefoot. Ensconced in this midsole is a full-foot BOOST cushioning setup. Black oval laces provide a finishing touch of detail, and, if the “Flaora” follows in the footsteps of the other YEEZY BSKTBL colorways, the outsole will feature a modified herringbone traction pattern.

At the time of writing the adidas YEEZY QNTM “Flaora” has been rumored for a May release, but adidas has yet to make any official announcement. The MSRP will likely be set at $250 USD — in line with past models.

Elsewhere in the world of footwear, check out the latest installment of HYPEBEAST‘s Sole Mates series, in which independent designer Mr. Bailey discusses the Nike ISPA Road Warrior.