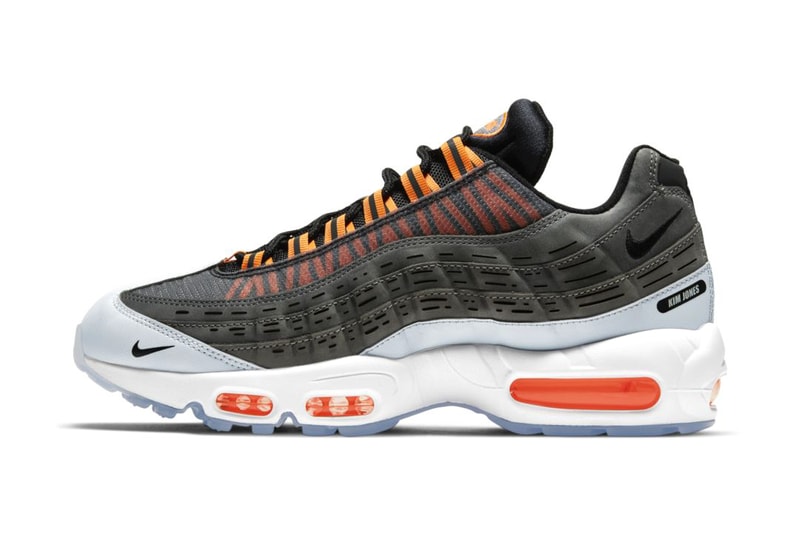 Kim Jones and Nike have teamed up for a collaborative Air Max 95 “Total Orange.” Following the designer’s striking Air Max 360 High collaboration from 2018 — and, of course, Jones’ work on the Dior x Air Jordan 1 “Air Dior” collection earlier this year — the two’s Air Max 95 presents a look that veers away from high fashion and back towards the world of Nike Sportswear.

Jones’ day jobs may be the head of Dior menswear and Fendi womenswear, but the British designer has long displayed a streetwise sensibility in many of his pieces and these AM95s are no different. The upper’s human anatomy-inspired panels are dressed in gray and equipped with a Morse code-like series of black dots and dashes. This is contrasted by a white toe cap with a small black Swoosh and a white mudugard that features Jones’ name stamped towards its rear. Another black Swoosh also appears on the lateral side, placed towards the black heel piece.

Eyestays boast a bright orange tone that’s accented with touches of hi-vis reflective silver. In an interesting twist, the Air Max 95’s standard strip of mesh that covers the toebox and bottom half of the eyestays is gone, replaced by a smoky black TPE. Tri-color tongue badges are placed on the black tongue and midsoles are done up in white with orange Air Max units. For a finishing touch, translucent outsoles reveal a large Nike Air hit on the bottom and PSI markings appear on the orange underfoot shank, an OG detail that’s essential to a purist like Jones.

First rumored in June, the Kim Jones x Nike Air Max 95 “Total Orange” will reportedly hit retailers in 2021, though neither this or any retail price has been confirmed by Nike. A “Black/Volt” colorway has also been speculated, but images have yet to be revealed.

For more footwear news, check out the latest installment of Sole Mates, in which Bobby Hundreds discusses his love of the Converse Chuck Taylor.