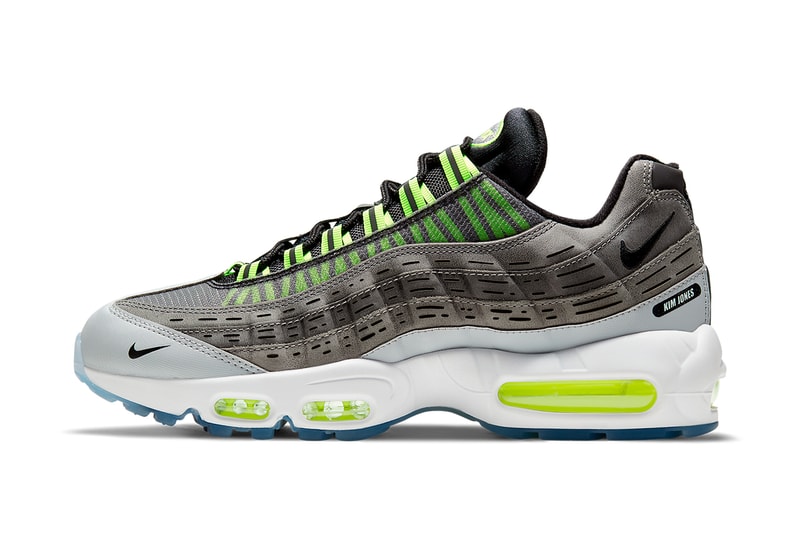 After applying his creative touch to the ever-popular Dior x Air Jordan 1 collaboration in 2020, Kim Jones is set to reprise his partnership with the Beaverton offices this year for a fresh footwear project with Nike. For this round the two parties reconvene for a capsule that involves a duo of Air Max 95s, one being this “Black/Volt” colorway that has just been unveiled by way of official imagery.

Similar to its “Total Orange” counterpart, this impending offering warrants greyscale color-blocking to take center stage, and calls for subtle blasts of neon to accompany. The luxury designer assembles the human anatomy-esque upper panels with muted grey backgrounds and slaps on solid black Morse code-like lines throughout. This is balanced out with snowy white overlays that make up the toe tips and mudguards, the latter of which hosts a Kim Jones banner towards the heel. More furnishings such as stark black Swooshes in the forefoot and heels are brought to the forefront, as well as the striking “Volt” accents that touch down on the lace loops and tongue’s Air Max branding.

Curvy and dimensional midsoles are lent an angelic skin and come contrasted with “Volt” Air bubbles to match the upper. The treading rounds off the design with an icy blue finish.

As of now, reports have the Kim Jones x Nike Air Max 95 capsule dropping towards the latter half of March for $220 USD a pair, but an announcement has yet to be made.

In case you missed it, a Lakers-themed Nike Air Max 95 with LeBron James’ accolades has been revealed.