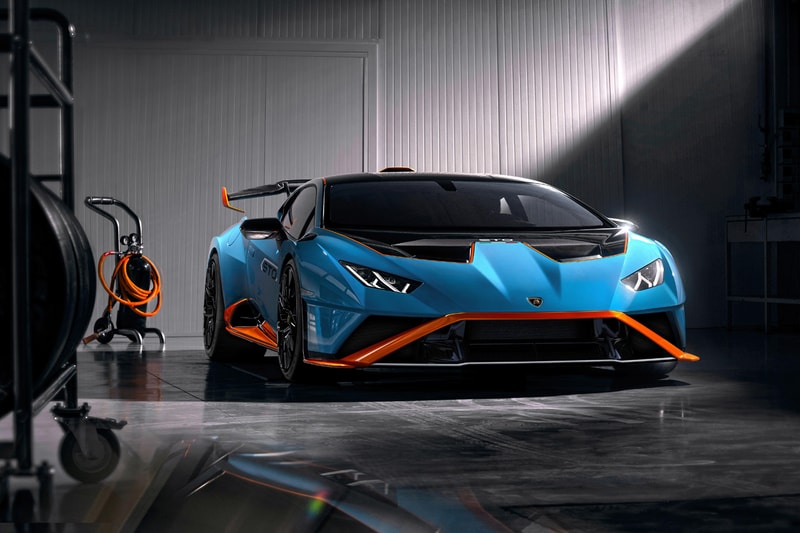 Lamborghini has unveiled its most hardcore Huracán to date: the STO, short for Super Trofeo Omologata. It appears in rear-wheel-drive form and is equipped with a V10 engine that produces 640 HP and 416 lb-ft of torque, which is good enough to propel the Italian supercar from 0-62 MPH in just three seconds and send it all the way to 192 MPH.

The STO is a road-homologated version of the Huracán that draws a heavy amount of inspiration from the racing heritage of Lamborghini Squadra Corse’s Huracán Super Trofeo EVO and Huracán GT3 EVO. It’s nothing short of extraordinary, and is quite literally a race car remade for the road.

Lamborghini’s chief technical officer, Maurizio Reggiani, said, “The Huracán STO delivers all the excitement of a beautifully balanced, lightweight and aerodynamically superior super sports car, mirroring the driving feeling and exhilaration of Super Trofeo, and perfectly set up for the world’s most demanding tracks but created for the road. The extensive technical solutions and intelligence gained from both our Super Trofeo and GT3 programs has been refined and embodied in the Huracán STO, allowing the pilot to experience the emotions of a racing driver, daily, in a road-legal Lamborghini super sports car able to take lap records.”

As Reggiani mentions, the STO is lightweight. In fact, this new model weighs 43kg less than the Huracán Performante, which comes as a result of it only having rear-wheel-drive, as well as it having three-quarters of its body panels made from carbon fiber.

Elsewhere, the STO offers no supercar “frunk.” Instead, Lamborghini has developed a new front bonnet, wings and bumper set-up called the “cofango,” which combines all three elements into one unipiece. Aside from this being lighter, it also allows for better airflow to the engine, better aerodynamics, and styling cues that further represent its inspiration.

Rounding out its design are components such as that huge rear wing that pushes the car’s rear into the tarmac, creating downforce at high speed, as well as the hood scoop on the engine cover, a rear fender with a NACA air intake which serves to provide air to the engine, as well as increase overall aerodynamic efficiency, and a purpose-driven interior.

The Lamborghini Huracán STO can be seen above and should be expected to land in dealers worldwide in the spring of 2021. Pricing starts at $327,838 USD before taxes.

In other news, Mansory has tuned the Audi RSQ8.