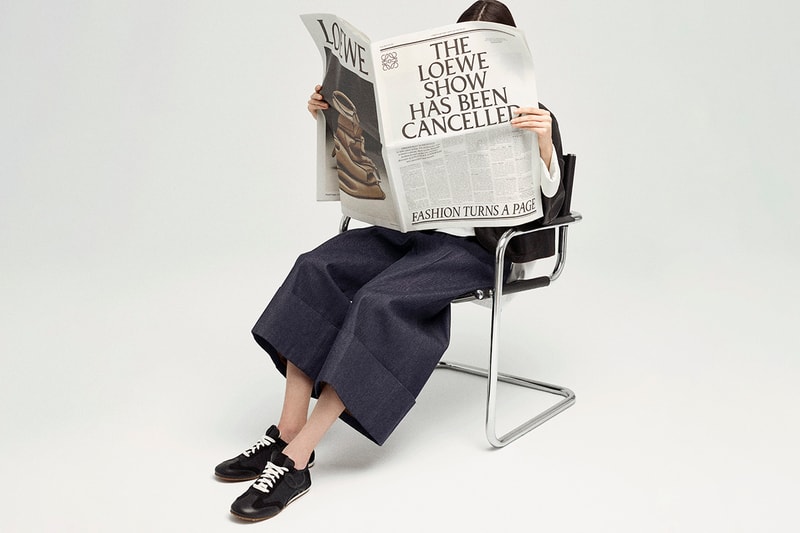 Read all about it: LOEWE has presented its Fall/Winter 2021 womenswear collection titled “A Show In The News.” In a boundary-breaking (news) attempt to subvert the world of fashion as we know it today, the label’s creative director Jonathan Anderson continues his efforts to create paper-based shows by presenting the new FW21 collection in the most commonly-found media format there is, producing a supplement for newspapers that will feature in Le Figaro and Le Monde in France, El Mundo of Spain, The Times of London, The New York Times, and Japan’s The Asahi Shimbun.

It’s a response to a show that wasn’t meant to be thanks to the ongoing Coronavirus pandemic, but that hasn’t halted Anderson’s creativity. Instead, it put a fire under his feet to create something millions will see, emblazoning the supplement with a bold headline reading “THE LOEWE SHOW HAS BEEN CANCELLED” alongside a LOEWE logo for the masthead.

Upon reading your supplement, you’ll find imagery captured by Fumiko Imano that sees Freja Beha Erichsen wearing the latest and greatest designs from LOEWE’s FW21 collection. Bright, acrylic tones flood the collection alongside structured graphics, which sees billowing silhouettes become seemingly structured with their use of lines — in short, it’s all very Mondrian, very modern abstract art, and perfect for when you want to feel special when dressing up at home.

Standouts from the “A Show In The News” include the lead quilted look. Quilting takes pride of place in the collection, but it’s strongest in the green and white coat that’s fluid yet firm. The shapes (in this and in the entire collection) are curvaceous but structured, and with this coat, the dimensions are only accentuated by the colorful lines cutting through it.

Elsewhere, LOEWE presents complete contrasts that are still playful. For example, there’s a black riding coat and matching culottes that are decorated with gigantic pink tassels, while an asymmetrical dress is covered in sparkles and glitter for a smattering of glam.

Rounding out the “show” is the return of LOEWE’s Amazona bag, which first released back in 1975. It’s a quintessential LOEWE accessory, and this season it appears in Nappa calfskin and anagram jacquard variations that fit perfectly alongside both the vivid and subtle pieces in the collection. Additionally, Anderson has made color-blocked lug-soled boots, pleated buckle and bracelet high heel boots, a new range of Puzzle bags, knotted and twisted bracelets and earrings in sterling silver, and finishes it all off with signature twisted chain elements in gold or rhodium-finished silver.

LOEWE’s “A Show In The News” can be seen in the gallery above or in the aforementioned newspapers, and will drop in-store and on LOEWE’s website sometime this August.

In case you missed it, check out what happened when HYPEBEAST spoke to Donatella Versace.