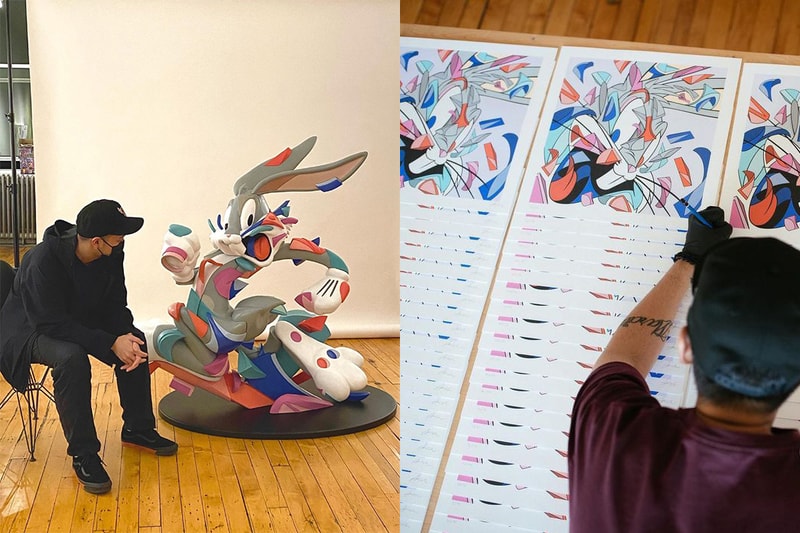 Fresh off an inaugural footwear collaboration with New Balance, Chicago-based artist Louis de Guzman is teaming with Warner Bros for a Bugs Bunny collaboration. Revealed through a series of Instagram teaser posts, De Guzman’s latest collaborative effort sees him adding his signature bright colors and “geometric abstraction” to both figures and prints of the rascally rabbit.

The figure presents Bugs in full sprint, looking to the side with a mischievous open-mouthed grin while he’s partially consumed by red, blue and teal shapes. Judging by De Guzman’s photo, the build appears to be several feet tall, though word on the size of figure that’ll release is still forthcoming. On the other hand, the print is a close-up portrait of Bugs’ face encircled by the same shapes and colors.

De Guzman is certainly no stranger to bringing his aesthetic to pop culture icons: he’s worked with J Balvin and SpongeBob SquarePants on vinyl figures and Modernica furniture, and first gained mainstream notoriety from his ELEVATE figure that showcased a skateboarding Bart Simpson. At the time of writing no official release information for this Louis De Guzman x Bugs Bunny collaboration has been announced, but it’ll likely be revealed soon.

Elsewhere in the world of art and design, Steven Harrington has brought his Our House is On Fire print to L.Ercolani’s famous Stacking Chair.