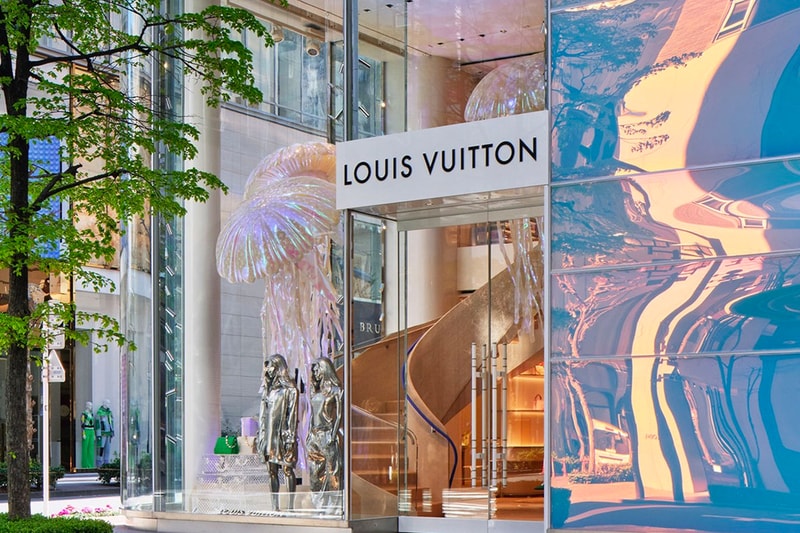 Louis Vuitton has officially announced the arrival of its highly anticipated Ginza Namiki flagship store in Tokyo’s top shopping district. The newly designed store is reimagined transformation of an existing location. Architects Jun Aoki and Peter Marina were at the helm of the project, which sees a fusion of the contemporary building aesthetic with the local streets of Tokyo.

Since 1981, Louis Vuitton has occupied the same corner in Ginza. Aoki and Marina have transformed the location into a highly modern appearance that interprets the reflections of water as a material phenomenon. Those passing by are reminded of the smooth, undulating surface of water through the shimmering angles of the glass building.

The retail space inside, which spans across four floors also received a full revision. Guests can see a glass facade that transmits shifting colors to the feature staircase and fixtures. The retail experience includes a permanent pop-in space that allows the brand to showcase seasonal animation for its upcoming arrivals.

On the upper levels, a dedicated private salon for VIP clients is available, as well as a culmination of F&B experiences including the Le Café V, which celebrates chef Yosuke Suga’s second collaboration with the luxury fashion house. Additionally, Louis Vuitton’s first in-house chocolates will also be making their debut at the store at the end of April.