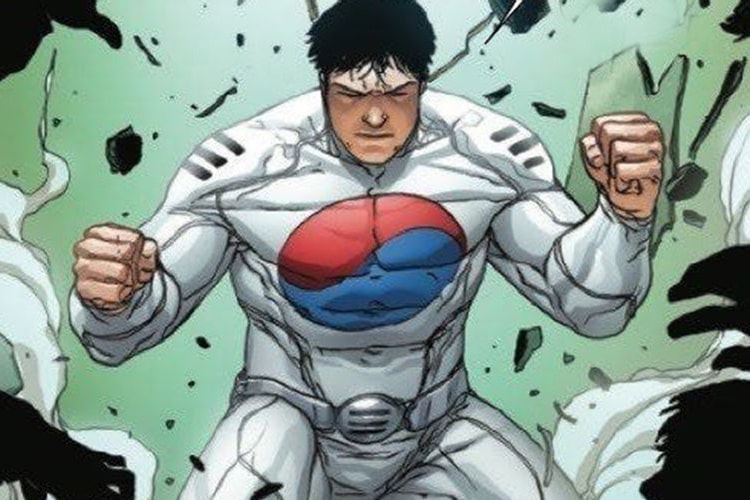 Marvel Comics has just released its newest South Korean superhero — Taegukgi. Named after the Korean flag (with an outfit to match), this “great nation” of a crime-fighter was revealed in Taskmaster #3 where the gun for hire travels to South Korea to clear his name after the death of Maria Hill.

It’s in South Korea where Taskmaster tries to locate Ami Han to learn more about the Rubicon Trigger project Maria Hill was working on. In the process, he sells fake superpowers to a death cult which leads to a confrontation with both White Fox and the newly unveiled Taegukgi.

One of the death cult members attempts to punch Taegukgi in the chin, to which nothing happens. The superhero replies with, “You’ll need more than high spirits to take me down…” As comic book fans can see from the teaser, Taegukgi is essentially the Korean version of Captain America with a large South Korean flag (at quick glance, he sort of looks like Pepsiman) with the tri-grams (괘) at his shoulders.

With the increase in Korean entertainment exports to the West, this most likely won’t be the last time we see a Korean superhero grace the pages of Marvel Comics.

#Marvel Comics introduced a new Korean superhero, and his name is '#Taegukgi ??'! What do you think his superpower will be? pic.twitter.com/VpmPv5LOUr

In other entertainment news, Lucasfilm has cut ties with Mandalorian actress Gina Carano.