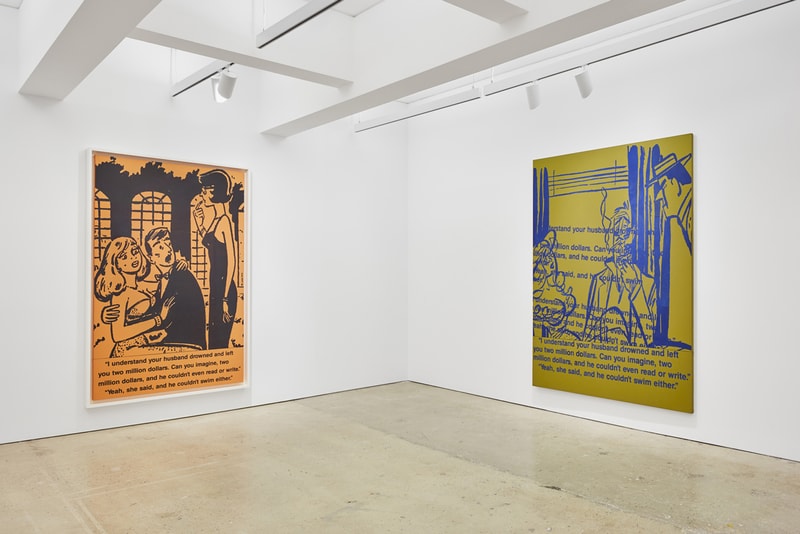 For its third showcase of the artist’s work, New York’s Nahmad Contemporary is showcasing several rare Richard Prince appropriation works and some never-before-seen pieces as part of “Richard Prince: Cartoon Jokes.” Drawing from editorial cartoons, the ever-controversial creative’s post-modern artistry is demonstrated across paintings both new and old.

Prince’s 1988-1991 Cartoon Jokes series provides the core of the showcase, spotlighting a variety of comic panels copied verbatim from The New Yorker that were separated from their original punchline, paired instead with unrelated phrases and jokes to create startlingly humorous, blunt and baffling narratives that recall the découpé technique of William Burroughs. These original artworks are rendered in bold shades of orange, red and green to further alienate the illustrations from their original context and lend pop art appeal.

The newer works, BLUE RIPPLES (2017-2019), are similarly transformative. The large canvases source borderline (or not) pornographic Playboy humor drawings, partially obscuring them with splashes of opaque blue paint and blowing them up to imposing size. Here, Prince undermines conventional creative processes (by printing and expanding painted works) and toys with the junction of challenging abstract expression and juvenile comedy, rendering the familiar entirely new.

“Jokes and cartoons are part of any mainstream magazine. Especially magazines like The New Yorker or Playboy,” Prince said in a statement. “They’re right up there with the editorial and advertisement and table of contents and letters to the editors. They’re part of the layout, part of the ‘sights’ and ‘gags!’ Sometimes they’re political, sometimes they just make fun of everyday life. Once in a while they drive people to protest and storm foreign embassies and kill people.”

“Richard Prince: Cartoon Jokes” is on view at Nahmad Contemporary until January 16, 2021.