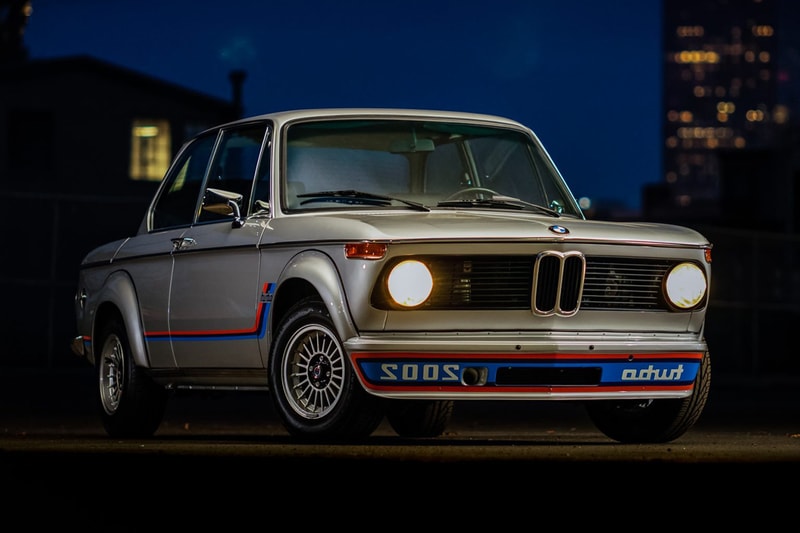 The BMW 2002 Turbo is a rare beast having been limited to just 1,672 units in its two-year production run, and now one is up for grabs thanks to Bring a Trailer. This model is in near-mint condition, showing just 17,000 miles on the odometer and having received many services and retouches in its lifetime to keep it looking as good as new.

This example is one of the 614 finished in the desirable “Polaris Metallic” paint job with complementing M Sport tri-color stripes. The stripes can be found on the extended front apron, along the side of the car just above the side skirts, and ever so slightly on the rear bumper before being cut off. Elsewhere, we see a set of staggered-width 13″ Alpina wheels, fiberglass wheel arch extensions, a trunk lid spoiler, and a fiberglass air dam with a flipped “turbo” stamp, all adding to the vintage ’70s road-racing aesthetic.

As for the BMW‘s power and handling, the prospective buyer won’t be disappointed. Power is supplied via a 2.0-liter M10 inline-four engine fitted with a Kühnle, Kopp, & Kausch turbocharger, 6.9:1 compression pistons, and an auxiliary oil cooler from the factory, delivering an impressive 188 HP and 179 lb-ft of torque to the rear wheels via a four-speed manual and a limited-slip differential.

Inside is equally classic in style, with the cabin being trimmed in black vinyl and carpets coming in a quintessentially vintage BMW salt-and-pepper square-weave pattern. Take a look at the 1974 BMW 2002 turbo above, and keep an eye on the Bring a Trailer listing before it ends at 2 p.m. ET today. As of writing, the bid is sitting at $172,000 USD.

In other news, Tomaso Trussardi has customized his Dallara Stradale.